With the most recent U.S. interest rate decision out of the way, international trade appears to be once again setting the tone for markets.

Lingering tensions between the U.S. and China sent equities to their first weekly decline in a month on the final day of trade last week when the S&P 500 halted a three-day advance, after Chinese officials canceled farm visits in the U.S. and President Donald Trump called the Asian nation a threat.

In this environment, technology and consumer shares, which are more sensitive to U.S. tariffs on Chinese goods, will likely resume their slide. Coincidently, in the coming week we’ll also have a couple of important earnings releases from companies within those sectors. This might provide more insight on how consumer and technology companies are weathering the ongoing trade pressure.

With this theme in mind, here are our three top stocks to focus on in the week ahead.

Nike (NYSE:NKE) will release its first quarter fiscal 2020 financial earnings on Tuesday, Sept. 24, after the market close. Analysts, on average, expect the sportswear giant to make $0.7 a share profit on sales of $10.43 billion. 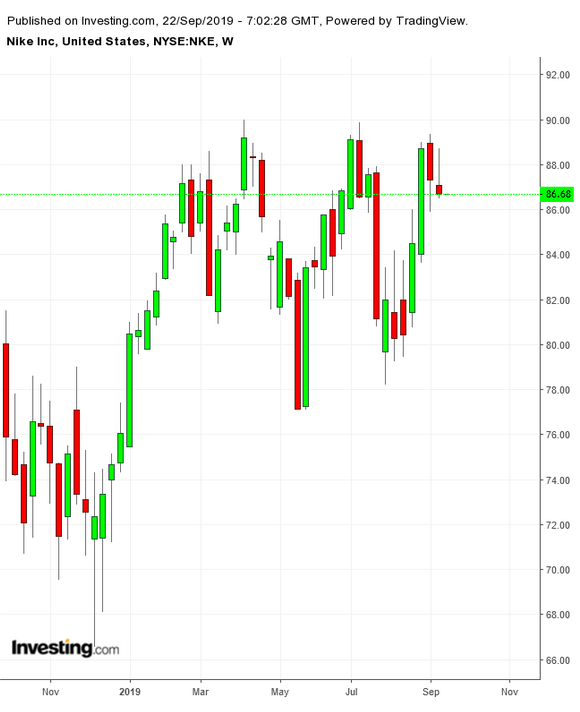 After surging to a record high of $90 a share in April, Nike stock has become vulnerable to the U.S.-Sino trade dispute. The stock slipped more than 1% on Friday, closing at $86.68. However, digging a little deeper, it becomes apparent that the risks to the world’s largest sports apparel company aren’t actually that big.

Nike has been consistently diversifying its production away from China–a strategy that’s made it less exposed to tariffs on Chinese imports. About 26% of Nike’s footwear and apparel were made in China last year. But according to Susquehanna Financial Group, less than 10% of that is imported to the U.S.

During its last earnings call, in late June, Nike executives downplayed the China risks by saying the trade war hadn’t impacted Nike as yet since the company continues to source products from China. That being said, Nike shares won’t be able to withstand a sharp sell-off in China-exposed stocks should that occur. And weakness in its shares might accelerate if we don’t see a trade resolution soon.

Chipmaker Micron Technology (NASDAQ:MU) will report fiscal 2019, fourth quarter earnings, on Thursday, Sept. 26, after the close. Analysts are expecting EPS of $0.51 on sales of $4.58 billion.

Since late June, Micron shares have recovered sharply, surging more than 50% on signs that weakness in the chip market has run its course. The stock closed down 1.32% to $49.16 on Friday.

The largest U.S. maker of computer memory told investors in June that it resumed some shipments to China’s Huawei Technologies Co., despite the U.S. export ban. Micron said it studied the export restrictions and determined “a subset” of products it sells to Huawei are not subject to the rules, Chief Executive Officer Sanjay Mehrotra said on a conference call that time..

Micron was forced to halt their shipments to one of its largest customers after the Trump administration banned Huawei from buying American technology. Micron makes chips used as the main memory in computers and as storage in mobile devices.

Sales to the Chinese telecommunications company generate about 13% of Micron’s annual revenue. Micron’s latest earnings release and conference call will provide further insight into the sector’s demand outlook for the remaining part of the year.

The slump in shares of streaming entertainment giant, Netflix (NASDAQ:NFLX) is deepening as it biggest rivals, including Disney (NYSE:DIS) and Apple (NASDAQ:AAPL), get ready to launch their services in November.

Netflix stock fell more than 5% on Friday to close at $270.75 after CEO Reed Hastings said the entrance of Apple, Disney and NBC (NASDAQ:CMCSA) to the global streaming market will push content costs higher and will be “a whole new world starting in November.”

Shares are down more than 25% since early July. Investors should expect this weak performance to continue until there are clear indications that the giant is holding on to its market share.

In the last quarter, Netflix missed expectations in both domestic and international markets, suggesting that expansion from here is getting tough as subscribers have a broader variety of entertainment options to choose from.