As reported by the General Administration of Customs of China last Monday, imports into the country decreased by 8.5% (in annual terms), which represents the worst result since mid-2016. The reduction in imports was another signal of a more significant than expected weakening of domestic demand. Earlier there were data showing a sharp decrease in the volume of new orders in May. Both electronics imports from Korea and Japan, and raw materials imports, including from Australia, have declined.

This concerns, first of all, the import of oil, liquefied gas, copper, iron ore, the largest supplier of which is Australia.

In the opposite direction, to Australia, go industrial goods, electronics. Thus, China is the largest consumer of Australian commodities, and a reduction in imports of these goods from Australia has the most negative impact on the state of GDP and the budget of this country, as well as on the quotes of the Australian dollar.

At the same time, the Chinese economy is increasingly in need of support from the People’s Bank of China in the form of easing monetary policy, i.e. weakening the yuan.

The trade war between the United States and China has a negative impact not only on the Chinese and American economies, but also on the state of the entire global economy, and the Australian economy, including.

A week ago, the Reserve Bank of Australia lowered its key interest rate by 25 bps. up to 1.25%, for the first time since August 2016. The Governor of the Reserve Bank of Australia, Philip Lowe, did not rule out further lowering the key interest rate. “There is reason to expect a lower key rate”, said Lowe last Tuesday after the meeting of the RBA board.

According to Lowe, the latest economic forecasts of the RBA suggest that the key rate will be lowered twice to the end of this year, to 1%. “The likelihood of lowering interest rates is still not excluded”, said Lowe.

Meanwhile, the US dollar is rising on Tuesday, continuing to recover from a strong drop last week amid a rise in the likelihood of the Fed lowering its interest rate. The yield on 10-Year US government bonds is also growing on Tuesday for the second day in a row from the 2-year lows reached last week near 2.053%. At the beginning of the European session on Tuesday, their yield is 2.157%. The growth of their profitability is usually accompanied by the growth of US stock indices and the dollar. Investors are gradually emerging from defensive assets, acquiring more profitable, but also more risky assets of the stock market. In view of this, the demand for the dollar as the funding currency of the American stock market is also growing.

At the beginning of the European session, the DXY dollar index futures traded near the 96.72 mark, 14 points higher than the opening price of the current week, and the AUD/USD pair – near the 0.6955 mark. The negative dynamics of AUD/USD prevails.

On Thursday (01:30 GMT) will be published the most important data on the state of the labor market in Australia. “The RBA Board is closely monitoring the labor market”, the RBA said last Tuesday. “Now we believe that we can achieve more, that we can achieve an unemployment rate of 4% or so”, said the head of the RBA Lowe. If labor market data turns out to be worse than forecast or weaker than previous values, then AUD will accelerate the decline. A positive report on the labor market will support AUD. In general, the negative dynamics of AUD/USD prevails so far. 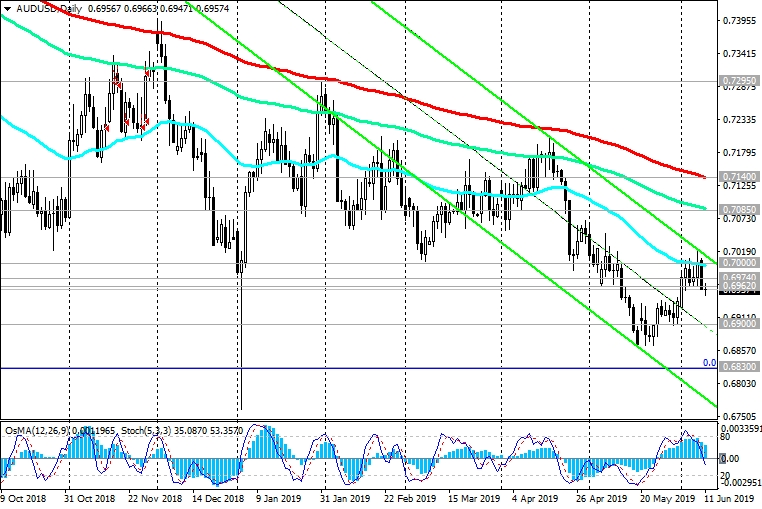