When Broadcom (NASDAQ:AVGO) CEO Hock Tan speaks, investors can’t afford to ignore him. That’s because the company he runs is considered a key barometer for the semiconductor industry due to its vast customer base and a diversified product line.

For the same reason, the San Jose, California-based company’s third-quarter earnings report and conference call will come under intense scrutiny by investors, who are keen to know if the broad-based weakness that chipmakers are facing is close to bottoming out.

Another reason Broadcom’s earnings are closely watched: the company derives almost half of its revenue from China, so its sales growth will provide some clues as to how the trade war between the U.S. and China is affecting its business. Huawei Technologies Co., which the U.S. government has blacklisted, purchases Broadcom switch chips that are a key component in the Chinese company’s networking gear.

Broadcom is also a major supplier of chips to Apple (NASDAQ:AAPL), making its commentary on the wireless market’s demand outlook too important to ignore. Sluggish demand from data centers, another significant source of customers for Broadcom, may also weigh on the company’s earnings tomorrow and will provide clues as to whether Tan’s prediction for the latter part of 2019 remains intact.

Analysts, on average, expect Broadcom sales to hit $5.55 billion in the quarter, up from $5.07 billion a year ago. Profit should rise to $5.14 share from $4.98. The chipmaker is maintaining its fiscal year 2019 sales forecast of $22.5 billion. About $17.5 billion of that revenue will come from chips and $5 billion from infrastructure software, the company said in a statement last month.

Despite facing some strong headwinds on the demand side, Broadcom has been successful in keeping investors excited about its future prospects. Its stock, trading at $294.44 at yesterday’s close, has outperformed the benchmark index, rising 22% in the last 12 months against the 17% expansion in the Philadelphia Semiconductor Index. 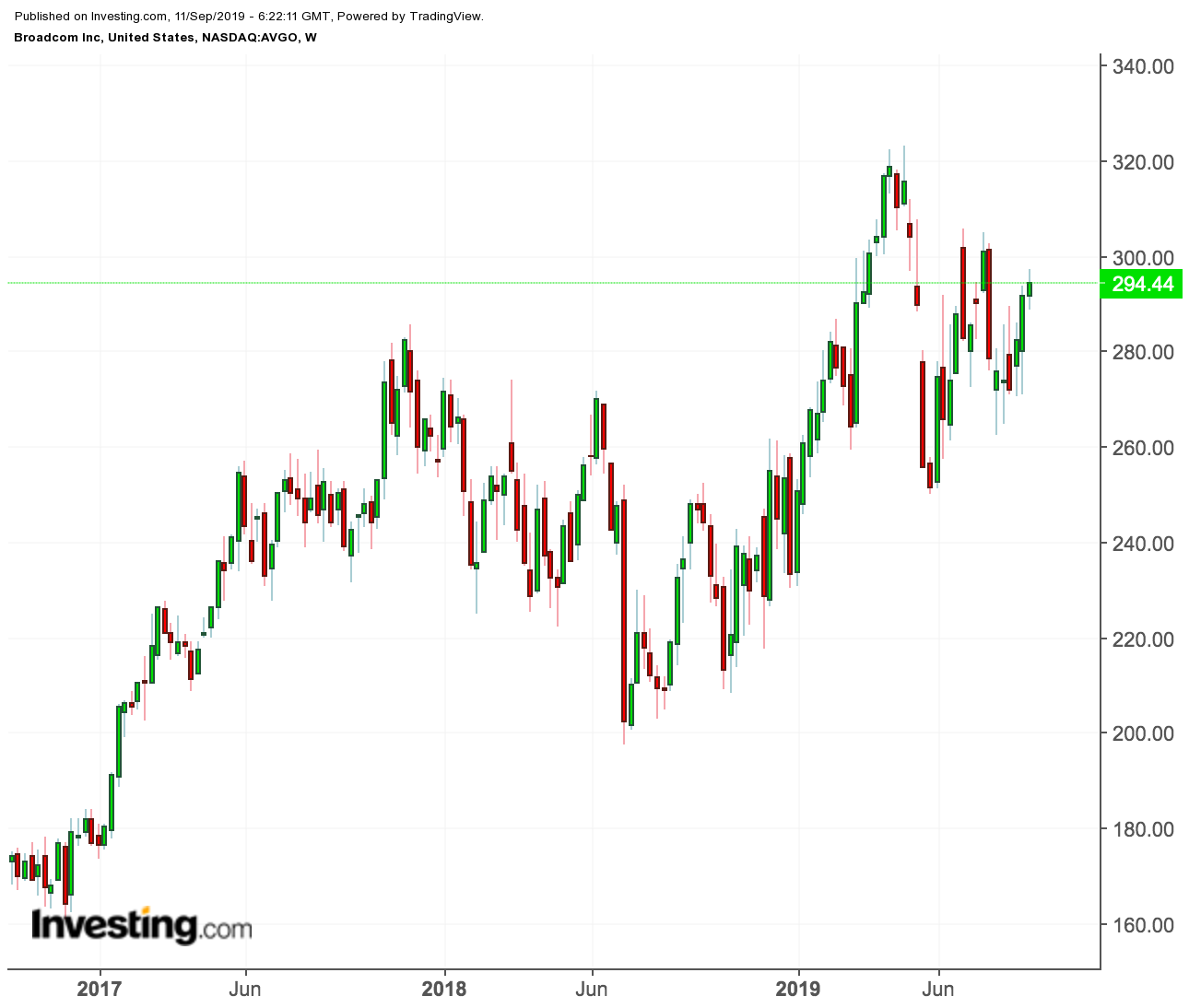 The company’s latest deal to buy Symantec’s (NASDAQ:SYMC) enterprise security unit — whose products help corporations to save their networks from hackers — is one such move that’s likely to strengthen the company’s enterprise offerings and further diversify its revenue base.

Broadcom stock has shown some resilience through the recent sluggish period for chipmakers. In our view, the effects of the Huawei ban and macroeconomic risks are well reflected in the stock’s current price. Any improvement in U.S.-China trade relations, or a possible deal that also involves Huawei, would be a big plus for Broadcom.