Coca-Cola (NYSE:KO) has some catching-up to do when it releases its second-quarter earnings on Monday morning. It has to provide its investors a solid reason to buy its stock, which has lagged behind both the arch rival, PepsiCo, Inc. (NASDAQ:PEP) and the benchmark S&P 500 this year. 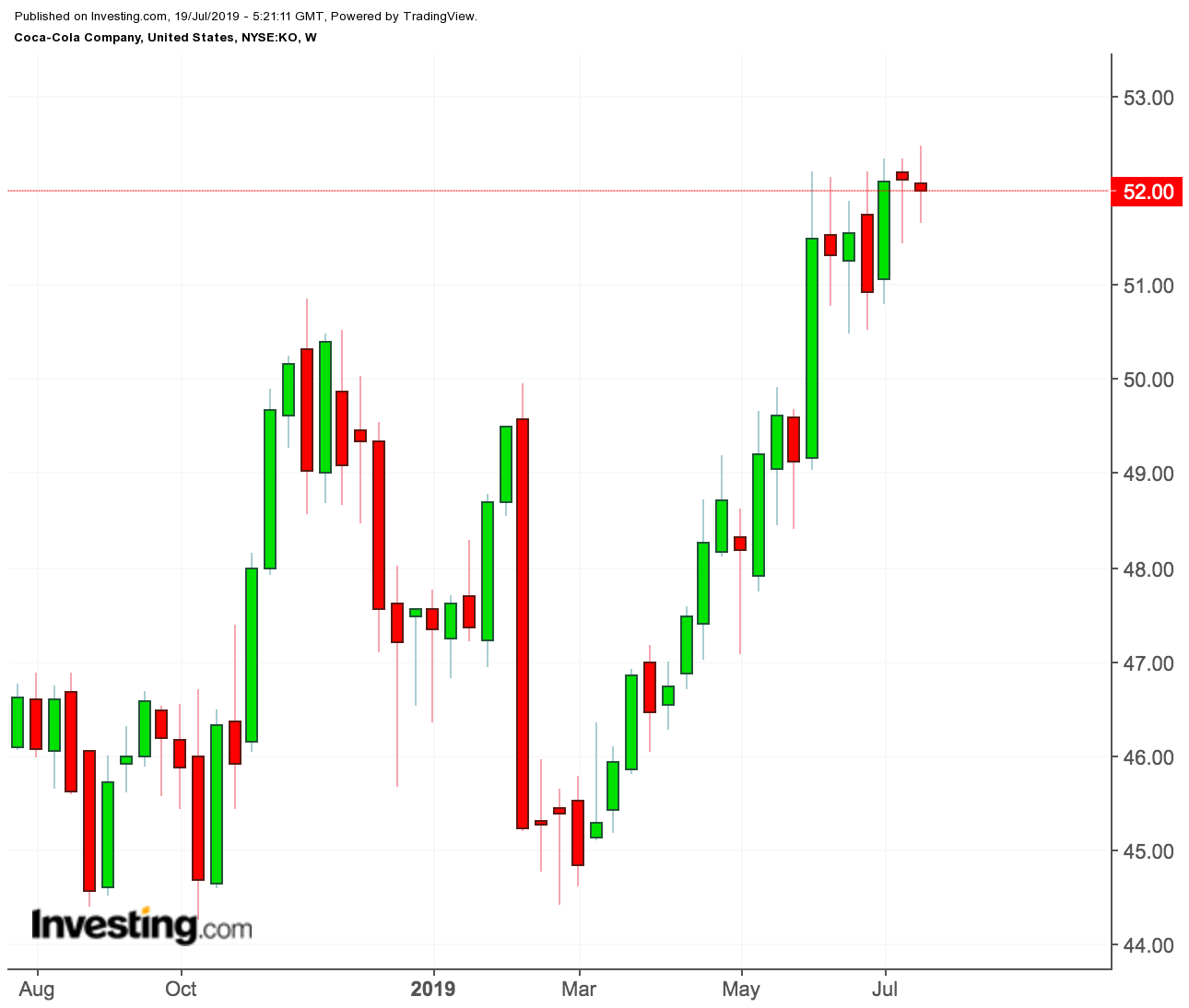 It would make a huge difference in this race to win investors if Coke were able to show that its global sales remain strong even amid signs of an economic slowdown. Unlike Pepsi, which is less dependent on foreign markets, Coke earns more than half its sales from global operations: 53% of its revenue came from outside North America last year, compared with 38% for Pepsi.

Early this year Coke warned investors that earnings would essentially be flat this year as the company deals with the impact of a strong U.S. dollar and the powerful headwinds hitting some of the major economies, including Europe and China. Unfortunately, it seems that situation hasn’t improved yet.

China’s economy slowed to the weakest pace in the April-June period since quarterly data began in 1992, amid the ongoing trade standoff with the U.S., while exports from India and Indonesia–the two most populous Asian countries–slumped more than economists forecast in June.

In the first-quarter, China and Asia Pacifics had contributed in a big way to revive sales growth for Coke where bottled water and trademark Coke performed well. Global unit case volume, a key measure for Coke, rose 2%, fueled by a 7% spike in Asia Pacific.

Despite this gloomy macro outlook, we continue to like Coke stock for long-term investors and see it as a good buy-on-the-dip candidate if its coming quarterly earnings disappoint. Coke, with 21 brands that generate $1 billion or more in annual sales, has been diversifying beyond sugary drinks. These efforts will soon start to pay off, especially after the company’s purchase last year of U.K.-based Costa coffee-chain for $5.1 billion.

The chain has 3,800 stores globally, offering Coke a retail presence in China as well as other parts of Asia, the Middle East, Africa and Europe. The acquisition also provides a hedge against slowing soda sales at home and gives Coke a strong foothold in the fastest growing category of soft drinks. Last month, the company introduced a ready-to-drink canned Costa coffee, representing the first major product introduction since it acquired the chain.

After testing Coca-Cola Plus Coffee last year in Asia, the soda giant was planning to launch it in 25 markets by the end of this year, Chief Executive James Quincey told analysts in April. In addition to its coffee push, the company is also looking to offer new variants of its flagship brand.

Coca-Cola Zero Sugar, a reformulated diet version, grew by double digits in Q1. And in the U.S., the launch of Orange Vanilla Coke, its first new flavor in a decade, helped drive 6% retail sales growth for the Coca-Cola brand.

With these growth prospects, Coke remains a solid dividend stock for long-term investors, with a yield of 3.07% and a quarterly payout of $0.4. The company has now increased its dividend for 56 years in a row.
.
Bottom Line

We believe Coke is a suitable defensive play for conservative investors, especially when the risks to growth stocks have increased and investors are playing it safe. On the back of its brand strength and turnaround momentum, we believe its shares will, sooner or later, catch up with rivals, benefiting investors who have some patience.