The DAX has climbed sharply on Tuesday after German stock markets were closed for a holiday on Monday. Currently, the index is at 12,203, up 1.31% on the day. In economic news, there are no German events. In the eurozone, Sentix Investor Confidence declined by 3.3 points, missing the estimate of 2.3 points. This marked the sixth decline in seven months. On Wednesday, Mario Draghi speaks at an ECB event in Frankfurt. The U.S. will post consumer inflation numbers.

There were fears that President Trump would slap Mexico with new tariffs, opening up another trade war front. The tariffs were set to take effect on Monday, but the U.S. suspended the tariffs after high-level talks helped defuse the latest crisis. As well, G-20 finance ministers agreed on a joint communique to reduce trade tensions. With President Trump and President Xi of China meeting at the G-20 summit in Japan in late June, we could see progress in the bitter trade dispute between the world’s two largest economies. On the DAX, bank and automaker listings are sharply higher on Tuesday. Deutsche Bank (DE:DBKGn) is up 2.67%. BMW has gained 2.67%, Daimler is up 1.87% and Volkswagen (DE:VOWG_p) has climbed 1.92%.

The U.S dollar suffered broad losses last week, and equity markets responded with strong gains. The DAX jumped 2.7%, its strongest weekly gain since early April. There was a combination of factors which hurt the greenback. First, comments from Federal Reserve president Jerome Powell have set the stage for a rate cut in the coming months. Since raising rates in December, the Fed has been neutral with regard to the direction of the next rate move, but rising trade tensions have raised fears of a slowdown in the U.S. economy. This has prompted the Fed to reconsider a rate cut later this year. The CME Group (NASDAQ:CME) has projected a 64% likelihood of a 0.25% rate cut, up sharply from a month ago, when the odds of a cut were just 16%.

Secondly, there was dismal news on the employment front. Nonfarm payrolls posted its second dismal reading in four months. In May, the economy created only 75 thousand jobs, down from 263 thousand a month earlier. Wage growth was unchanged at 0.2%, shy of the estimate of 0.3%. Despite these soft job numbers, the U.S. labor market is in strong shape, and the greenback could quickly bounce back.

*All release times are DST

*Key events are in bold 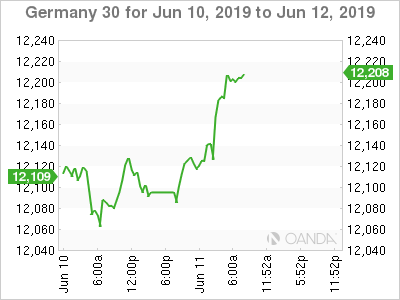