The Emini collapsed in March. Since the selloff had 3 legs down, it is a parabolic wedge. That usually attracts some profit-taking. This is especially true when the climax is extreme and near support. Traders see the selloff as a test of the bottom of the 2 year trading range. That is the December 2018 low.

Friday sold off and then reversed up strongly. The context on the daily chart is good for the bulls. If today is a big bull day, then the 1 – 2 week short-covering rally would have likely begun. If so, everything will probably go up for the next week or so.

But it is important to note that the daily chart is in a strong bear trend. When there are big surprises in a strong trend, they usually come in the direction of the trend. Consequently, despite a parabolic wedge bottom at support, the Emini could collapse further today and over the next week.

It has been crashing for 4 weeks, but not quite enough to be called a crash. If it hits the 13% or 20% locked limit down levels today, traders will call it a crash. It would then be comparable to 1987 and 1929.

Limit down in the Globex session

The Emini traded down 5% in the Globex market and it has stayed there. That means it is locked limit down. Traders are deciding if the overnight selloff is a pullback from Friday’s late rally or if that rally has failed. Will Friday’s rally just be a bull trap in a strong bear trend? Or, will today’s limit down open reverse up quickly and be a bear trap in a new 2 week rally?

Remember, even if today reverses back up strongly, traders should expect the final low to be many months from now. It might even come in a year. This is not January 2019. This looks like 1987 or worse. If a V bottom begins, there is only a 20 – 30% chance that it will be the end of the bear trend.

When there were only 100 Americans infected with the coronavirus a few weeks ago, I said that 40 – 70% of America could get infected. America’s behavior tells me that people are coming to that conclusion.

Very few of us were around during WWII or the Great Depression, and none of us lived through the 1919 pandemic. Those are the last times when there was such a widespread, prolonged change in the behavior of America. This change has probably already created a recession. Traders are deciding how bad things will get. If today sells off strongly, then a 40 – 50% selloff will be more likely than not.

The Emini is locked limit down. It will probably stay limit down until the day session opens. There might be enough panic selling to quickly drive it down to -7%. That is the 1st day session limit.

I mentioned that there are additional trading halts at -13% and -20%. If it hits either, this will be called a crash. Crashes are rare. There were only 2 in the last century. I was trading during the 1987 Crash. The extreme change of behavior in our people is enough to turn this into a crash.

It probably will not happen, but this is the environment that can create a crash. Traders should only consider buying if there is a very strong rally. Let’s hope that this is a bear trap and the start of a 2 week rally.

Even if it is, the mood of our country is so bleak and deep-seated that traders have to expect even a strong rally to fail. We are going lower. I have mentioned 40 – 50% as reasonable targets many times over the past 2 years. If today sells off, this bear trend will reach those targets quickly. 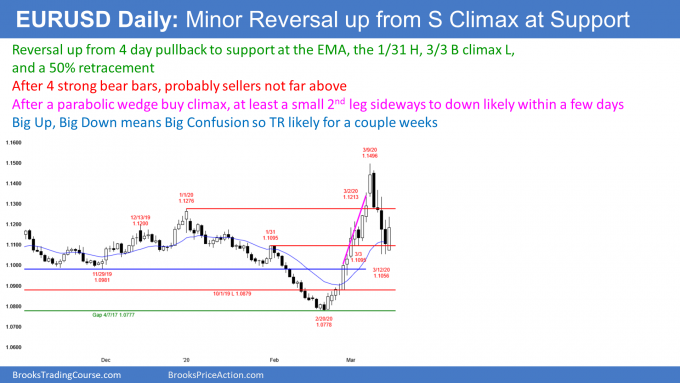 Here are several reasonable stop entry setups from Friday. I show each buy entry with a green rectangle and each sell entry with a red rectangle. I rarely also show limit order entries and entries on the close of bars. Buyers of the Brooks Trading Course and Encyclopedia of Chart Patterns have access to a much more detailed explanation of the swing trades for each day.

My goal with these charts is to present an Always In perspective. If a trader was trying to be Always In or nearly Always In a position all day, and he was not currently in the market, these entries would be logical times for him to enter.

If the risk is too big for your account, you should wait for trades with less risk or trade an alternative market like the Micro Emini.