For a while, the focus in discussions on the GBP has been the perceived probability of a no-deal Brexit (Chart 2). We argue this should be augmented by global sentiment on credit risk, the consequences of a prolonged Brexit process on consumer spending and corporate investment, not least a normalisation of strong Q1 data, and the effects of ECB policy on the broad EUR.

In coming months, (1) we are neutral to somewhat positive on politics but worry that (2) global appetite for credit-like risk will continue worsening, (3) noticing that UK macro is now surprising on the downside and (4) that ECB passiveness is leading to broad EUR strength. In our view, factors 2-4 are likely to weigh on EUR/GBP.

Thus, we lift our EUR/GBP forecast from 0.86 to 0.90 and expect a higher trading range of 0.86 (in the event of renewed optimism on Brexit) to 0.91 (further weakening of data and worsening of sentiment on Brexit).

The GBP suffered in the May rout. As the Tory leadership battle rolls, we argue that GBP trading is increasingly shifting towards factors other than political risks.

Taking a step back from politics and looking at the UK’s fundamental macro picture, we note the key shifts in EUR/GBP over the past 10 years are surprisingly well captured by three simple factors (in relative terms, see Chart 1 below). These are (1) expected real GDP growth, one year ahead, (2) core inflation and (3) nominal M1 growth (key in the QE era of 2012-16). These macro variables provide a broad framework for anchoring GBP into fundamentals in a period when on a daily basis EUR/GBP has been driven seemingly almost solely by Brexit headlines.

Fundamentals have actually favoured GBP strength since 2018 and a Brexit premium is already partly embedded in this specification via growth expectations. In the past few weeks, we have seen a weakening of UK data via PMIs and flash GDP numbers, suggesting the economy is likely to see a minor deterioration in fundamentals, which is set to weigh on GBP. 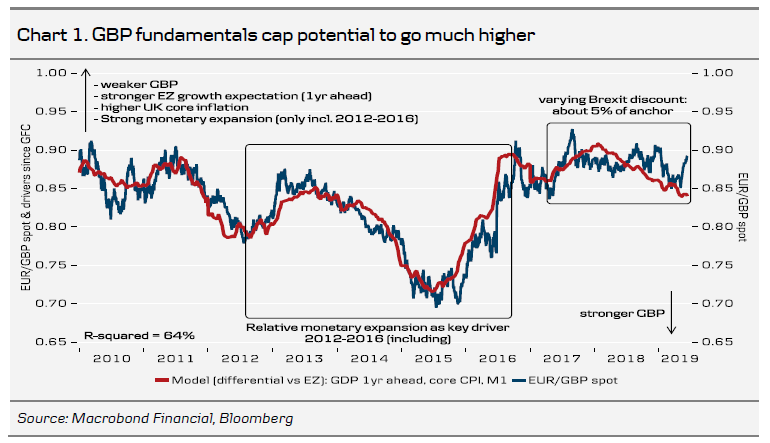 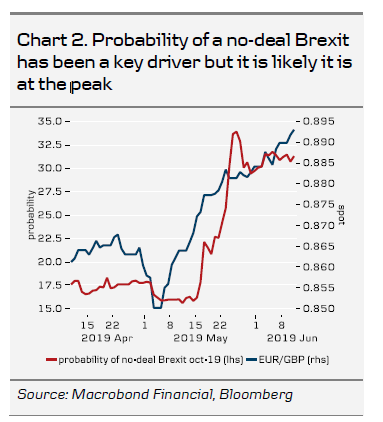 Probability Of A No-Deal Brexit 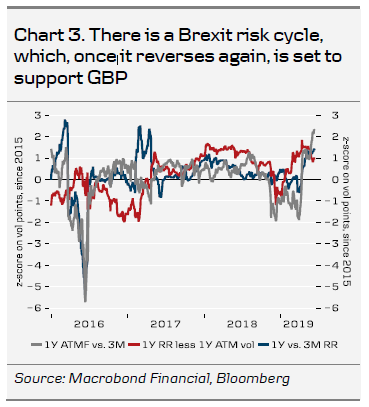 There Is A Brexit Risk Cycle

EUR/GBP is currently on the high side of fundamentals, which limits the upside when taken in isolation. However, given the incoming data, the risks are shifting in a way that favours EUR strength via ECB passiveness and GBP weakness via rising credit spreads, the relative policy space at the Bank of England versus the ECB and an unwinding of positive inventory build-up effects. We think this will be a headwind for EUR/GBP in coming month(s), even as Brexit-related headlines are becoming less material.

Brexit is not only about risks – it has had real effects on the economy. Currently, Brexit uncertainty is weighing on corporate investment decisions and house prices. While consumer spending is still relatively strong, a string of macro data has come in below expectations in recent weeks. A convergence on relative data surprises is set to be mildly GBP negative over the summer, as the effect of hoarding peaks and it is likely to lead to a small downgrade in fundamentals (see Chart 4). 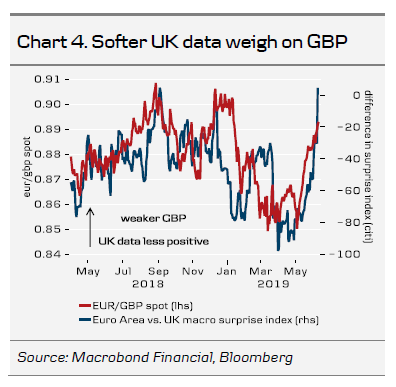 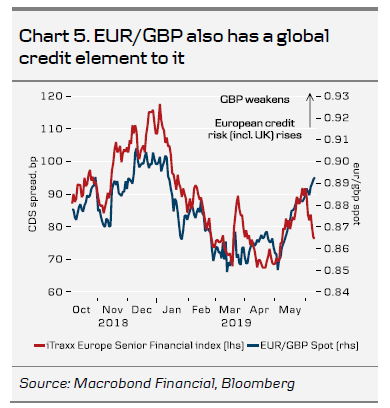 EURGBP Also Has A Global Credit Element To It

Brexit discount: it is a risk cycle and it is likely we’re at a peak

On politics, evidence from the past few years suggests UK politicians can move spot around 5% in a matter of weeks when fighting it out internally and against EU peers. As of today, we view this 5% as fully priced in. Indeed, pricing the GBP off only political risk is all about probabilities and one needs to be very convinced this will end in a no-deal Brexit to add further momentum on this, which we are not.

Chart 3 is one way of showing market-implied pricing of the Brexit premium but through implied volatility in various types of options while trying to net out the ‘overall’ FX volatility level. Here, it is also clear that how Brexit-related volatility is priced is moving in cycles. Political deadlines are flexible and can be disregarded at will. We think this underlines that Brexit risks are priced too adversely at present.

Short-cut to GBP forecasting: think about credit risk and ECB

There is a global angle to forecasting EUR/GBP by acknowledging that a no-deal Brexit risk is essentially a low-probability event of something quite (for the GBP) bad. It is a tail risk as found in every credit and credit-like investment opportunity. Viewed this way, the direction of global credit spreads is part of the price formation in the GBP and there is some evidence of such a channel (see chart 5).

Second, ECB (in)action is currently creating an environment of broad EUR strength. The Bank of England (BoE) has more policy space to act if needed (even though we do not have this as a main scenario). However, through either global risk appetite or pricing lower eurozone inflation expectations, it has been our observation that GBP has weakened off these factors too. We think central banks remain behind the curve and that credit spreads and/or inflation expectations could move further from here. On a side note, the BoE is probably implicitly aware of the credit element inherent in GBP and to the extent that we can compare GBP to a position with tail risk such as emerging markets FX, credit, etc., for currency stability, it does help to keep a bit of carry in the cross. Hence, we believe it is likely that the BoE has a high bar for talking about easing.

In summary, we believe the risk of a no-deal Brexit will be downplayed as a driver for the GBP in the period ahead. Rather, slightly weaker UK data, global sentiment and the ECB are new headwinds for EUR/GBP. A large repricing is probably limited, as relative fundamentals are still good, even if they become slightly less so. In turn, we revise our expectation for the GBP to a weaker path and forecast EUR/GBP at 0.90 in a range of 0.86-0.91.