Stocks fell sharply on March 22, an unexpected decline. The S&P 500 fell a stunning 1.9%, in what seemed like a decline that came out of the blue. Is this the start of the next big wave of selling? I don’t think so. Sorry.

Everyone is worried over what secret message the yield curve is sending. What is the message the yield curve is sending? That the Fed raised rates too much? That is obvious. There is no inflation? Obvious, again. A recession is coming? Not so sure about that. In fact, the 10-2 spread has inverted by as much as 45 basis points before recessions of years past where triggered.

It really may be different, because investors are applying a principle that an inverted yield means a recession is coming. The problem is that in the past spreads were much wider, and therefore yields on the short-end had to rise further before we got to an inversion. Look at the chart below. In past instance when the 3-Month and the 10-year yield inverted, rates on the 3-month yield had to rise by nearly 400 basis points. In this current cycle, it has taken a rise of less than 250 basis point. The mistake the Fed made was assuming rates on the long-end would rise higher then they did, however, low-interest rates globally suppressed the long-end of the US curve.

Inversion today may not have the same meaning as in the past. There is just not the same margin of error today, as their once was. 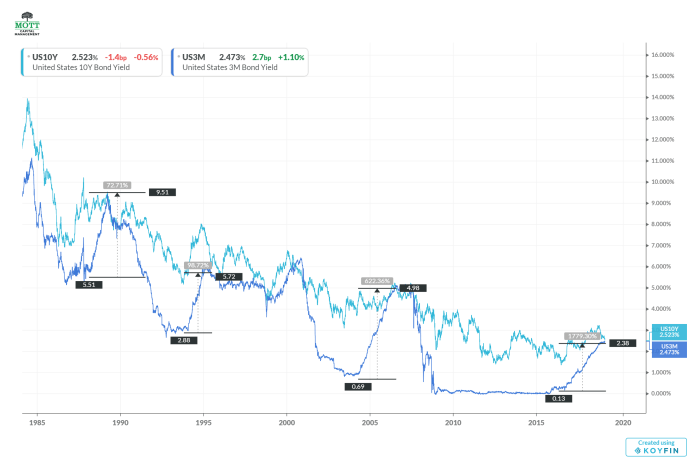 Then there is this next chart below it took the 10-2 spread to reach a -45 basis in March 1989, a negative 45 basis point in April 2000, and a negative 16 basis points in November 2006. The current spread is around 10 basis point. The spread may have to invert much further before a recession signal is triggered.

One thing to remember is that the current federal funds rate 2.4%. But remember the Fed now uses a range of 2.25% to 2.5%. The Fed could quickly reduce the current effective fund’s rate to the lower end of the range if it needs more breathing room, without officially cutting rates.

Very quietly and what seemingly went unnoticed during the sell-off was the Atlanta Fed’s 1Q GDPNow forecast, which rose to 1.2% growth from earlier estimates of 0.4%, which isn’t the greatest, but of course, better than the alternative.

On the brighter side, the S&P 500 managed to stay above support at 2,798 and appears to be closing in a critical gap filling event.

Also, the VIX rose to around 17.50 today and failed at resistance.

As many of you already know, I’m not in this camp of doom and gloom.