One of the biggest movers of the day on Friday was the U.S. dollar. The U.S. stock market appeared very weak prior to the opening bell and precious metals, especially gold, appeared to be rocketing higher. Almost right from the open, the markets washed out the fear and changed direction. The U.S. dollar did the same thing.

This renewed strength in the U.S. dollar continues to baffle foreign investors and foreign governments as they continue to try to support their economies and currencies against a stronger and more agile U.S. economy and currency. Even as the U.S. dollar strength is frustrating many investors, it is also attempting to keep a lid on traditional safe havens such as precious metals.

This further complicates many foreign nations because their gold reserves are not appreciating at the same rate that their currencies are devaluing. Couple that with capital outflows, consumer protectionism, waning economic outputs, and the need to protect local currencies to avoid populist panic, and King Dollar seems to be riding high.

A friend of ours and foreign currency trader suggested we read this article: Does China have enough U.S. dollars to survive the U.S. trade war?

We’ve authored many articles about the U.S. dollar over the past few months. We believe the strength in the U.S. dollar will continue and that a support level above $92 is likely to continue to support the price for some time. That being said, the current price rotation near $96.50 provides a recent low price rotation level that could turn into future support after recent highs near $98.40 are broken.

Many times you’ve probably read our comments about a “capital shift” and how this shifting capital across the planet will be driving future investment in the U.S. and other foreign markets. At this point in time, it’s almost like a dog chasing its tail. The more support the U.S. dollar receives, the more pressure there is for foreign markets to support their currencies and economies. The weaker foreign economies become and foreign currencies devalue, the more demand for U.S. dollars increases to help offset local weakness. It starting to become a vicious cycle. 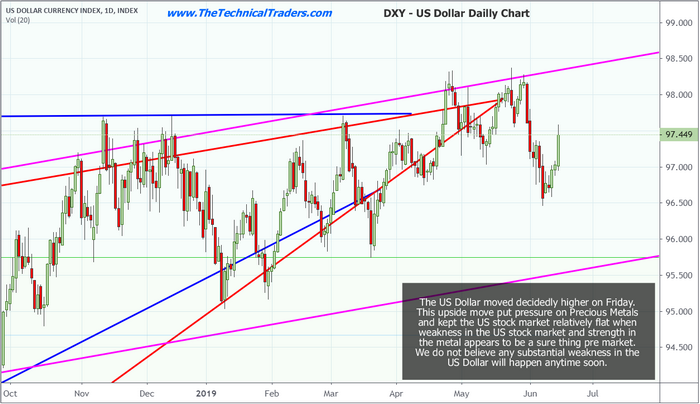 We believe the defined price channel between the two magenta colored lines will continue to dominate U.S. dollar price activity until price breaks through either the upper or lower range of this price channel. The current support near $96.50, will likely turn into a new price floor once price breaks above $99. 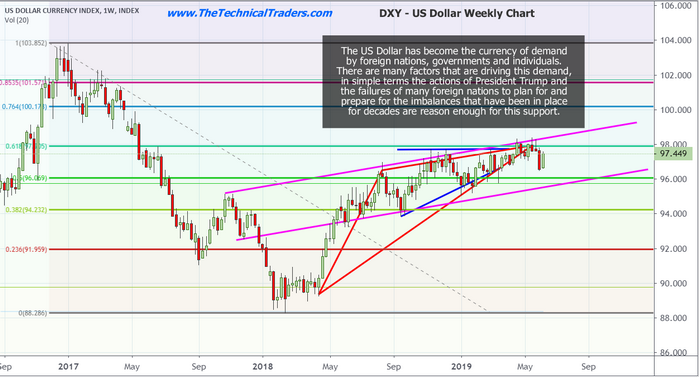 Additionally, suitable trade deals, such as we witnessed between the U.S. and Mexico recently, will help to alleviate currency pricing pressures on foreign currencies. This strength in foreign currencies presents an opportunity for global investors to take advantage of pricing gains.

Stronger foreign currency valuations and economic output will help to ease the U.S. dollar dominance eventually. Until that happens, as traders we need to be aware of the pricing issues related to the capital shift that is taking place, the pricing pressures on precious metals, and the likelihood that foreign investors will continue to pile into U.S. equities while King Dollar is dominating. 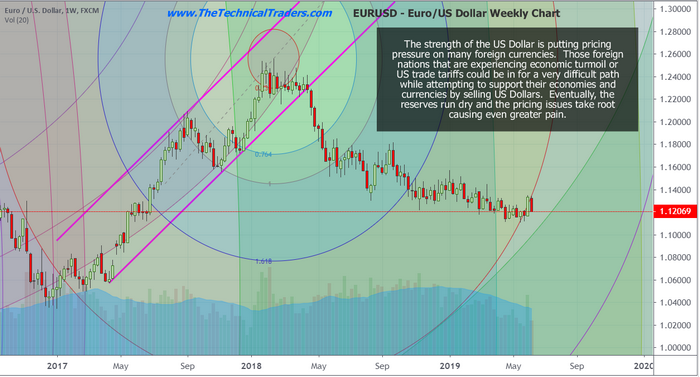 Pay very close attention to foreign market weakness and news of banking issues or government bailouts of foreign banks. Much like the U.S. credit crisis in 2008/2009, bank failures and extended credit risk exposure can lead to waterfall events. This would be our biggest fear for the global economy if foreign governments and banking institutions are not properly prepared for extended devaluation periods. If things really started to crumble overseas we could see gold and the dollar move up together, it has happened before in times of crisis.

We’ll keep you informed as we see things transpire. In the meantime, King Dollar rides high; end of the sunset and foreign governments/nations will continue to attempt to support their economies and currencies. Eventually, the fear factor will push precious metals broadly higher.