Many, many years ago (27, actually) I wrote a paper on how a tariff on oil actually has some beneficial effects which needed to be balanced against the beneficial effect that a lower oil price has on economic growth. But since the early 1990s until 2015 or so I can count on the fingers of one hand how many times the issue of tariffs came up in thoughts about the economy and markets. To the extent that anyone thought about them at all, it was to think about how lowering them has an unalloyed long-term positive effect. Which, for the most part, it does.

But the economics profession can sometimes be somewhat shamanistic on the topic of tariffs. Tariffs=bad; time for the next chapter in the book. There is much more complexity to the topic than that, as there is with almost any economic topic. Reducing economics to comic-book simplicity only works when there is one overwhelmingly correct idea, like “when demand for a good goes up, so does the equilibrium price.” The end: next chapter.

Tariffs have, though, both short-term and long-term effects. In the long-term, we all agree, the effects of raising tariffs are deleterious. For any given increase in money and velocity, we end up with lower growth and higher inflation, all else equal. It is important to realize that these are largely one-time effects although smeared out over a long period. That is, after equilibrium is reached if tariffs are not changed any longer, tariffs have no large incremental effect. It is the change in tariffs that matters, and the story of the success of the global economy in terms of having decent growth with low inflation for the last thirty years is largely a story of continuously opening trade. As I’ve written previously, this train was just about running out of track anyway so that we were likely to go back to a worse combo of growth and inflation, but reversing that trend would lead to significantly worse combinations of growth and inflation in the medium-to-long term.

In the short-term, however, tariffs can have a positive effect (if they are expected to remain) on the tariff-imposing country, assuming no retaliation (or even with retaliation, if the tariff-imposing country is a significant net importer). They raise employment, and they raise the wage of the employed. They even may raise the real wage of the employed if there is economic slack.

The chart below shows the y/y change in manufacturing jobs, and ex-manufacturing jobs, for the last 40 years. Obviously, the manufacturing sector has been shrinking – a story of increased productivity, but also of trade liberalization as manufacturing was offshored. The Obama-era work programs (e.g. “Cash for Clunkers”) temporarily reversed some of that differential decline, but since 2016 – when we got a new President – manufacturing payrolls growth has caught up to non-manufacturing. That’s not a surprise – it’s the short-term effect of tariffs. 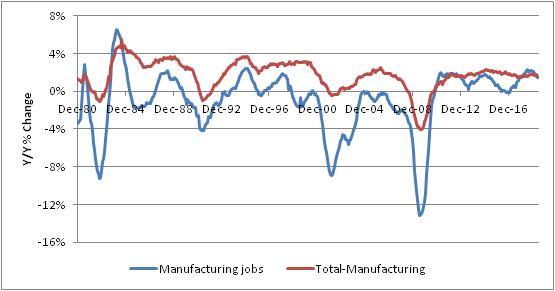 The point is that tariffs are a political winner in the short-term, which is one reason I think that people are overestimating the likelihood that “Tariff Man” is going to rapidly concede on trade and lower tariffs. If the Administration gets a clear “win” in trade negotiations, then I am sure the President is amenable to reversing tariffs. But otherwise, it doesn’t hurt him in the heavy manufacturing states. And those states turn out to be key.

(This is a relative observation; it doesn’t mean that total payrolls will rise. The economic cycle still has its own momentum, and while tariffs can help parts of the economy in the short term it doesn’t change the fact that this cycle was very long in the tooth with lots of imbalances that are overdue for correction. It is no real surprise that employment is softening, even though it is a lagging indicator. The signs of softening activity have been accumulating for a while.)

But in the long run, we all agree – de-liberalizing trade is a bad deal. It leads among other things to bloat and inefficiency in protected sectors (just as any decrease in competition tends to do). It leads to more domestic capacity than is necessary, and duplicated capacity in country A and country B. It promotes inefficiency and unbalanced growth.

So why, then, are investors and economists so convinced that putting tariffs or subsidies on money has good (or even neutral) long-term effects? When the Fed forces interest rates higher or lower, by arbitrarily setting short-term rates or by buying or selling long-term bonds – that’s a tariff or a subsidy. It is protecting interest-rate sensitive sectors from having interest rates set by competition for capital. And, as we have seen, it leads in the long run to inefficient building of capacity. The Fed evinces concern about the amount of leverage in the system. Whose fault is that? If you give away free ice cream, why are you surprised when people get fat? 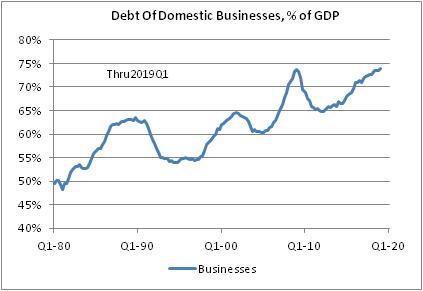 Debt Of Domestic Business % Of GDP

The only way that tariffs, and interest rate manipulations, have a chance of being neutral to positive is if they are imposed as a temporary rebalancing (or negotiating) measure and then quickly removed. In the case of Federal Reserve policy, that means that after cutting rates to address a temporary market panic or bank run, the central bank quickly moves back to neutral. To be clear, “neutral” means floating, market-determined rates where the supply and demand for capital determines the market-clearing rate. If investors believed that the central bank would pursue such a course, then they could evaluate and plan based on long-term free market rates rather than basing their actions on the expectation that rates would remain controlled and protective.

It is no different than with tariffs. So for central bankers criticizing the trade policy of the Administration, I say: let those among you who are without sin cast the first stone.