Futures on the S&P 500, Dow and NASDAQ 100 continued to wobble this morning after Samsung Electronics (KS:005930) posted a 60% year-on-year plunge in first quarter profits, adding to Alphabet’s (NASDAQ:GOOGL) earnings disappointment and weighing on sentiment across Asian and European markets.

The STOXX Europe 600 slid lower with financials shares, which remained under pressure from the failed Deutsche Banke-Commerzbank merger and its cumbersome effects on the outlook for the region’s banking system. Miners stocks also suffered, as did technology shares, which looked set to take a hit from signs of plateauing growth by Google’s parent company, after the internet giant posted revenues $1billion short of expectations–something we warned about. The stock was down 7.73% in the pre-market.

In the earlier Asian session, China’s Shanghai Composite (+0.52%) bucked the regional slide–driven by thin trading, due to Japan’s “Golden Week” holiday–and gained ground despite poor manufacturing data. Perhaps, dip buyers are providing the fodder for short sellers according to the trading pattern of a H&S top, as illustrated in yesterday’s post.

While Societe Generale’s head of Asia equity, Frank Benzimra, warned investors to be sector-focused at this time, our own sector analysis revealed inconsistencies in the current market dynamic.

Financials (+1.01%) outperformed, ranking second-best sector for the month after lagging throughout the previous rout–and some expect banks will extend gains further. This is another example of how trading patterns don’t necessarily fit with fundamentals trends. Since banks profit from interest rates, and therefore rally as the rates tick higher, we would have expected slowing inflation, and consequently the growing chances that the Fed would cut rates, to deflate financial shares. 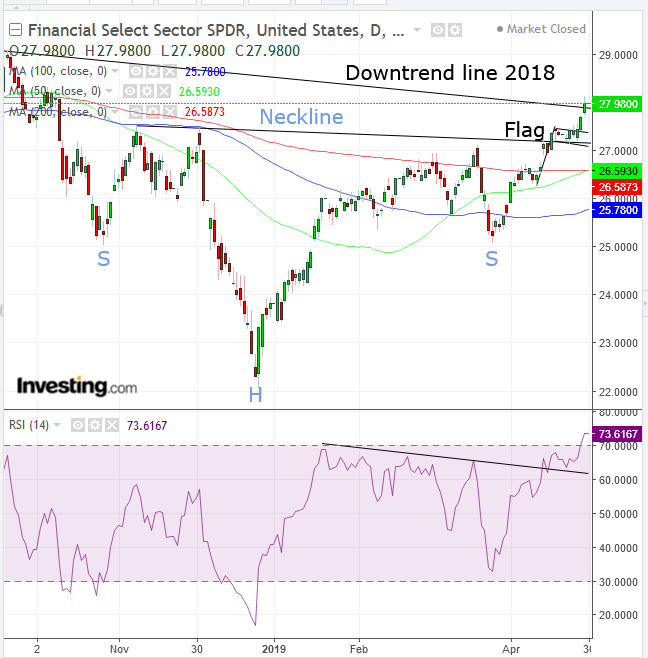 Technically, the ETF completed a H&S bottom, a falling flag and closed above its downtrend line since January 2018, suggesting a longer way to go up.

Mirroring the same market structure inconsistency as financials was Real Estate’s (-1.03%) underperformance: falling rates should boost the sector, as they would make mortgages more affordable and expected cashflow from property investments more competitive than Treasury yields. 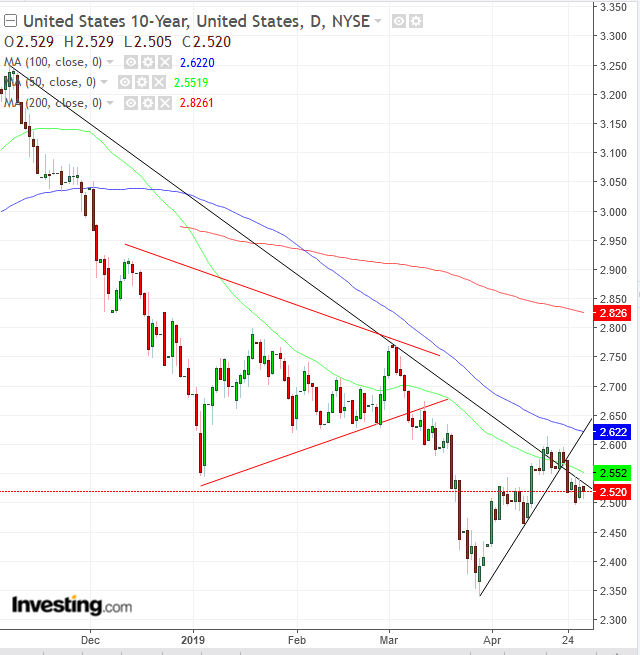 Conversely, yields on 10-year Treasurys are falling ahead of the Fed’s monetary policy decision, coming out tomorrow, in line with the outlook for lower rates and with their own downtrend.