Roku (NASDAQ:ROKU) stock has risen more than fourfold thus far in 2019, but signs are emerging that the big run may be coming to an end. The shares have plummeted around 23% from their highs on Sept. 6 on worries over rising competition. Some signs indicate the stock may still have further to fall.

Increasing competition isn’t the only thing that investors need to worry over. The stock’s valuation is lofty, trading at nearly double the price to sales multiple of Netflix (NASDAQ:NFLX) — with Roku at 17.16 vs Netflix’s 7.12. Additionally, the company isn’t even expected to earn a profit until the year 2021.

The stock fell sharply after Comcast (NASDAQ:CMCSA) unveiledi ts new Xfinity Flex, a streaming media device creating yet another competitor for Roku. As Comcast’s attempt to capture cord-cutters, the Xfinity Flex joins other streaming devices such as the Amazon (NASDAQ:AMZN) Fire, Apple (NASDAQ:AAPL) TV, and Google (NASDAQ:GOOGL) Chromecast. It resulted in the stock plunging by as much as 15% intraday on Sept. 18.

As a result, the stock broke a critical level of technical support at $143.50 and is facing further declines. The stock’s next major level of technical resistance does not come until $122. Should that level of support not hold, then it is at risk of declining to $100. At that point the stock would fill a technical gap that was created following Roku’s better-than- expected quarterly results in August.

Additionally, the relative strength index also suggests that the stock may fall further too. The index has fallen to a level of around 41. It would need to fall to 30 or lower before indicating that the equity has become oversold.

The technicals tell only half the story. The fundamentals suggest the shares are extremely overvalued. Based on analysts’ consensus estimates, sales are expected to grow by about 37% in 2020 to $1.5 billion from $1.1 billion in 2019. That leaves the stock trading with a one-year forward price to sales multiple of about 10. 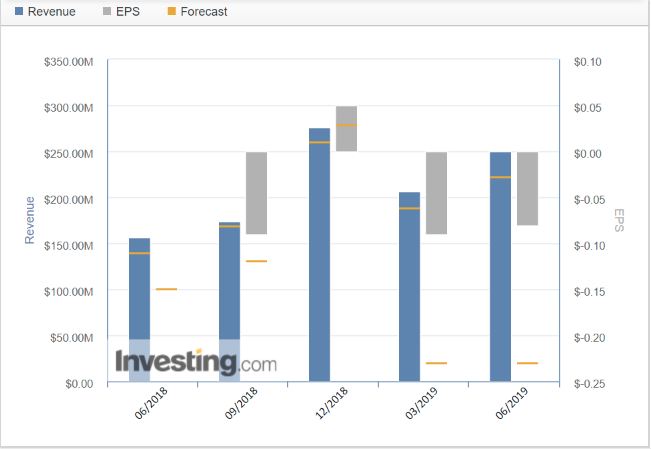 It is a lofty valuation for a company that creates revenue from selling a hardware device along with a platform that generates ad revenue. For example, Apple is a device maker that also has a service revenue model; it trades with a one-year forward price to sales multiple of 3.7. Meanwhile, Facebook (NASDAQ:FB) and Google, which generate nearly all their revenue from ads, trade at 6.3 and 4.5 respectively.

Netflix, a content creator, is considered at times a highly or even overvalued equity. The company generates its revenue from a subscription-based model and trades at about five times one year forward sales estimates.

Roku does offer a slightly faster sales growth opportunity compared to the other companies mentioned above. However, that growth does not come at a pace that is more than double, which is what Roku’s current valuation would imply.

Despite the stock’s big advance, the short-interest levels have remained rather tame, at just 11.7% of the float. It could indicate that short sellers have decided to steer clear of the stock altogether, or they are merely waiting for a time to enter.

Whatever the case, the performance of the stock thus far in 2019 has been breathtaking, and hard to ignore. However, stocks typically do not rise in a straight line, and at times their valuations can even become stretched. At present, this appears to be the case for Roku and, should the technicals start to falter, the stock may have a bit further to fall.

Disclaimer: Mott Capital Management, LLC is a registered investment adviser. Information presented is for educational purposes only and does not intend to make an offer or solicitation for the sale or purchase of any specific securities, investments, or investment strategies. Investments involve risk and unless otherwise stated, are not guaranteed. Be sure to first consult with a qualified financial adviser and/or tax professional before implementing any strategy discussed herein. Upon request, the advisor will provide a list of all recommendations made during the past twelve months. Past performance is not indicative of future results.