The S&P High Yield Dividend Aristocrats Index is comprised of the 50 highest dividend yielding constituents of the stocks of theS&P Composite 1500 Index that have increased dividends every year for at least 25 consecutive years. Data for the index goes back to January 2000. Figure 1 displays the theoretical growth of $1,000 invested in the index versus the growth of $1,000 invested in the S&P 500 Index starting in January 2000. 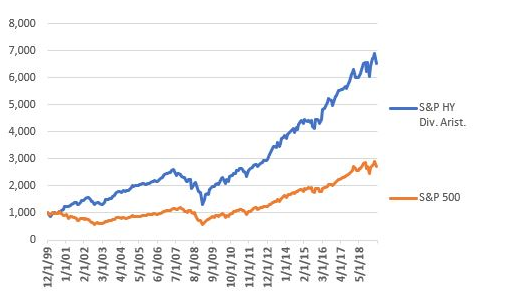 Growth Of $1,000 Invested In The S&P High Yield Dividend

As you can see, since inception the index has significantly outperformed the S&P 500 Index, posting a gain of +551% versus +173% for the S&P 500. Of course, you can’t trade an index, you must trade a fund or ETF that attempts to track the given index. So, we turn our attention to… 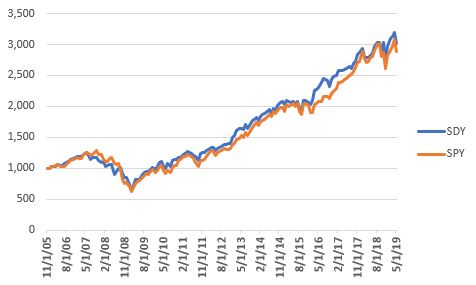 Since SDY started trading it has slightly outperformed ticker SPY (+201% versus +189%). Combined with the index performance prior to SDY inception, this is pretty good all by itself.

Ticker SDYL is the ETRACS Monthly Pay 2xLeveraged S&P Dividend ETN, an Exchange Traded Note linked to the monthly compounded 2x leveraged performance of the S&P High Yield Dividend Aristocrats(R) Index (the “Index”), reduced by the Accrued Fees. The first full month of trading for SDYL was June of 2012. Figure 3 displays the growth of $1,000 invested in SDYL, SDY and SPY since 5/31/2012. 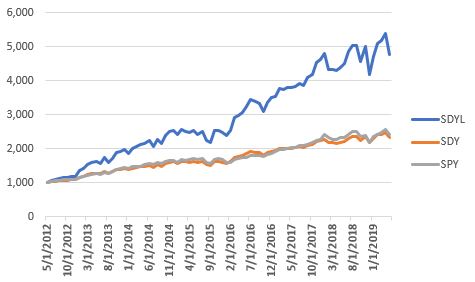 So does this mean SDYL is the best choice? Not necessarily. While it has made more than twice as much as the other 2 ETFs, that performance comes at the price of an average standard deviation and a maximum drawdown that is also twice as large. So, the risk factor is something to consider. But that’s not even the real problem. The real problem is that SDYL barely trades at all.

For investors looking for profit potential, SDYL – at first blush looks – terrific. But will enough investors ever take notice enough for SDYL to trade with any real volume?

Disclaimer: The data presented herein were obtained from various third-party sources. While I believe the data to be reliable, no representation is made as to, and no responsibility, warranty or liability is accepted for the accuracy or completeness of such information. The information, opinions and ideas expressed herein are for informational and educational purposes only and do not constitute and should not be construed as investment advice, an advertisement or offering of investment advisory services, or an offer to sell or a solicitation to buy any security.