Here’s some of the standout economic and markets charts on my radar (originally posted on LinkedIn). I aim to pick a good mix of charts covering key global macro trends, and ones which highlight risks and opportunities across asset classes.

So it’s interesting to note the second point: the diffusion index has increased for 6 months in a row now. This indicator operates with about an 8-month lead on the global composite leading indicator–i.e. the possibility of a re-acceleration in H2 is also real. 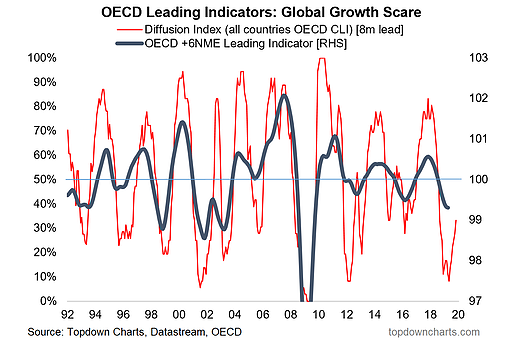 2. The Fed vs the rest: Back in the U.S.A, the softer growth pulse has swiftly shifted the consensus to expect rate cuts. It brings to mind this chart which I first talked about earlier in the year. I talked about this chart with regards to my bearish outlook on the U.S. dollar.

There’s obviously a lot of moving parts, but if you look at this chart, strictly on policy rates, the U.S. Federal Reserve has vastly more room to cut rates than its developed market peers. If the Fed moves into full blown rate-cut mode it’s quite likely that the U.S. dollar rolls over into bear market mode.

Key point: The Fed has way more room to cut rates than other DM cbanks. 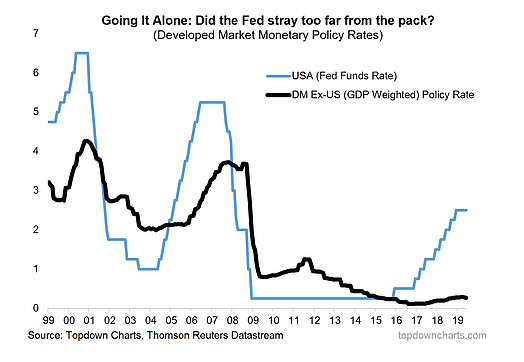 3. U.S. Dollar & Asian/EM FX: As we head into H2 the path of risk assets in general, but particularly commodities and emerging markets, is going to be heavily influenced by what happens with these 4 charts (i.e. bull case = USD breaks down, Asian FX and EM FX rebound, USDCNY at least stays stable). It seems like the same thing over and over again (U.S. dollar) but there is some complexity to it, and a few things that need to go right there.

USDCNY is obviously the big elephant in the room, with the 7.0 (or 6.97 for that matter) level yet to be tested. But for me, I’m keeping a close eye on the DXY as the upside breakout looks to have failed, and a possible breakdown is on the cards (in a market where the consensus is crowded to the long side).

Key point: Keep an eye on the U.S. dollar (and Asian/EM FX) going into H2. 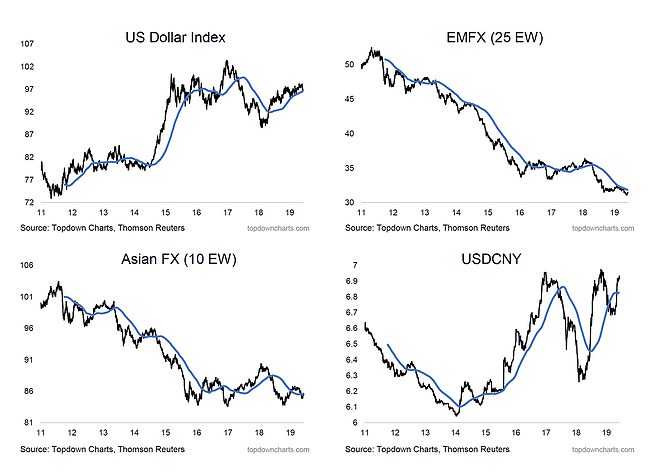 4. WTI Crude Oil–Price Seasonality Shifts: Since peaking in April, WTI crude oil has undergone a 20% correction which has taken most traders by surprise (judging by the consensus long futures positioning). Looking at the chart below you can see the slump in oil prices came just after the end of that positive seasonal patch.

The seasonal tailwinds tend to pick up again from around late-June through early-October. So with geopolitical risks still simmering away in the background this is quite an interesting chart. 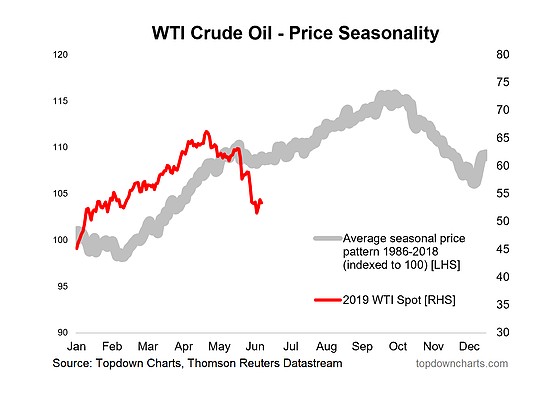 5. S&P 500 Valuations: Depending which metric you track (in this case I am using a blend of price vs forward, trailing 12m, and trailing 10-year average earnings), U.S. equity valuations have come down noticeably since the peak in January last year.

On the numbers, the latest reading of the blended PE ratio is down -11% vs the peak, albeit it’s still +31% higher than the long term average. So while we can say that they’re not as eye-wateringly expensive as they were a short time ago, they’re not cheap by any means either.

Key point: U.S. blended PE ratio is still 31% higher vs its long term average.Thanks for reading, I appreciate your interest in my work. 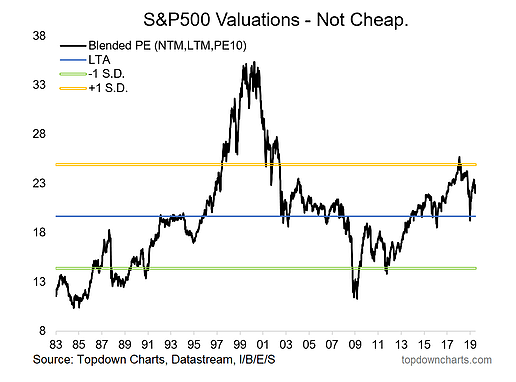