The US Administration added 28 Chinese firms to their blacklist ahead of key trade talks in Washington this week.

The Chinese onshore yuan (CNY) firmed slightly after their ‘gold week’ celebrations, allowing the offshore yuan, USD/CNH to slip marginally by -0.19%. Implied volatility for the yuan has hit a 1-month high as traders remain uncertain of how talks will go with China this week.

BOE governor mark Carney says they’ll be the first central bank to stress test the financial system.Chinese service PMI hit a 7-month low, yet remains expansive at 51.2 (52.1 prior).Japan’s PM Abe says the economy continues to show signs of weakness mainly in exports, although domestic demand fundamentals are firm. When asked about BOJ cutting rates further into negative territory, he expects Kuroda to make the appropriate decision weighing benefits and costs.NZD and AUD are the strongest majors ahead of trade talks, seemingly at ease with Chinese companies making it onto the US blacklist. JPY is currently the weakest, seeing NZD/JPY as the biggest mover and close to reaching its typical daily range (time for mean reversion??).

Asian stock markets have managed to shrug off a weaker than expected Caixin China Services PMI that has slipped to a 7-month low of 51.3 in Sep from 52.1 in Aug; below consensus of 52.9. The latest data has indicated that growth in China’s services sector has continued to shrink since Apr 2019.Also, a significant negative trade related news flow has failed to dent the on-going optimism in Asian stocks. The U.S administration has placed eight Chinese technology firms on a blacklist yesterday due to human rights violations ahead of the high-level U.S-China trade negotiation talk that kickstarts this Thurs.Market participants seem to be focusing on the latest earnings guidance from South Korea’s Samsung Electronics (KS:005930); a major Asian technology firm which is also a barometer on the health of the global semiconductor industry. Samsung Electronics said its operating profit for the Jul to Sep 2019 quarter was likely to be 7.7 trillion won, down from a record of 17.6 trillion won a year ago but above consensus estimates of 7.1 trillion won that has reduced the concerns on the state of global semiconductor industry hit by the on-going trade tensions.Samsung Electronics (KS:005930) has rallied by 1.15% so far that outperformed its benchmark Kospi 200 index that has risen by 0.89%.The local China stock market has reopened after a week-long break where the China A50 ETF (listed on the Hong Kong Stock Exchange) has rocketed to 2.13% that also triggered a positive feedback loop in terms of sentiment.Another positive catalyst is that China central bank, PBOC Governor Yi Gang will be part of the Chinese delegation that will head to Washington for the high-level U.S-China trade talk. One possibility on the inclusion of the PBOC Governor this time round for trade negotiation talk is to act as an “assurance” that China is not weakening its currency, the yuan to counter the negative effects on U.S. tariffs.The Hong Kong Exchanges & Clearing (HKEX) has decided to scrap its US$29 billion unsolicited bid for London Stock Exchange Group (LON:LSE). Market participants have viewed the withdrawal as a positive development for HKEX where its share price has rallied by 3.10% that outperformed the Hang Seng Index.

Fed Chair Jerome Powell is speaking about “A View From The Federal Reserve” before the National Association for Business Economics”. With markets pricing in around an 80% chance of a cut next week, they may be left disappointed if he lacks even the slightest of a dovish tone, which could weigh on equity markets who seem to love a good rate. Fed members Kashkari and Evans also hit the wires, although Powell is likely to garner more attention. That said, if they speak a similar script, it will carry more weight. 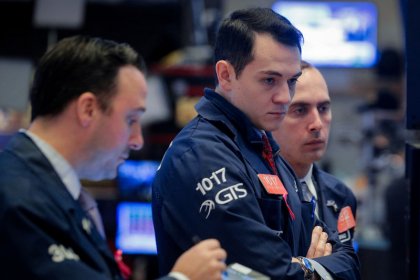 Wall Street drops as tensions climb ahead of trade talks
By Reuters – Oct 08, 2019

Opening Bell: U.S. Futures Fall As China Toughens Its Stance Ahead Of…
By Pinchas Cohen/Investing.com – Oct 07, 2019