Recent volatility in U.S. economic indicators has trimmed the outlook for the upcoming second-quarter GDP report (due at the end of July), but the current estimates show a degree of stability after a period of downgrades. That’s an encouraging sign, although with another month-plus of data releases to digest before the government’s preliminary Q2 GDP data is published leaves plenty of room for surprises.

Meantime, the current run of nowcasts compiled by The Capital Spectator reflects a slightly higher increase vs. the previous update. Real (inflation-adjusted) economic output appears on track to rise 2.0% in Q2, based on the median estimate. Although that’s down from Q1’s healthy 3.1% rise, a 2.0% advance is strong enough to keep recession risk under control, at least for now. Note, too, that today’s revised 2.0% median nowcast for Q2 is slightly above the 1.8% estimate published on May 29. That’s a trivial change but the modestly higher comparison suggests that the outlook is no longer deteriorating and so the macro trend may be stabilizing at a modest pace. 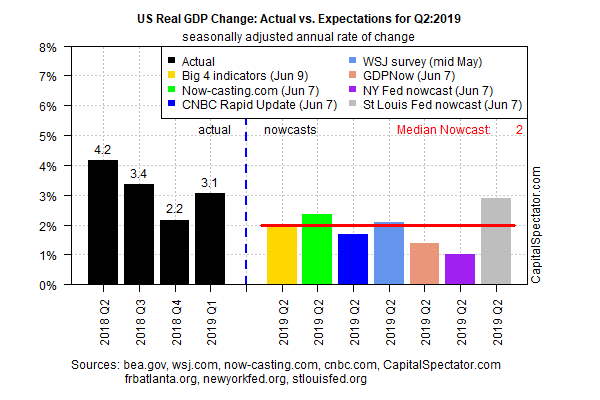 Nonetheless, it’s premature to give the all-clear for the economy, thanks largely to trade-related risk swirling about. One analyst warns that a “Trump recession” may be near if the White House imposes new tariffs on Chinese imports.

Nonetheless, President Trump says he’ll impose new tariffs on China if his Chinese counterpart, Xi Jinping, doesn’t meet with him at the upcoming Group of 20 summit in Japan.

Deciding how (or if) to factor Trump’s comments into economic projections is open for debate. Despite the unclear guidelines for this analysis, the President’s rapidly evolving and often surprising remarks to the media on crucial economic topics can be a volatile mix that change macro assumptions in a flash.

In any case, the outlook at the moment points to a moderate rate of growth that looks set to gradually slow in the quarters ahead. The Capital Spectator’s revised projection for the one-year trend in GDP sees output rising 2.6% in Q2, down from the year-over-year 3.2% gain in Q1. In the quarters to come, the growth rate is expected to decelerate further, based on The Capital Spectator’s average estimate. 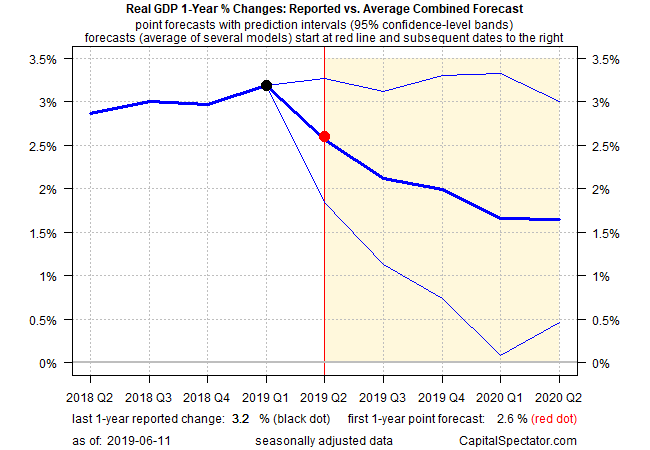 The economic outlook will no doubt be revised in the weeks ahead as new numbers are published, perhaps dramatically. This Friday’s twin releases for industrial production and retail sales in May, for example, could be significant factors, for good or ill, in adjusting macro expectations.

The biggest factor, of course, may be Trump’s upcoming decisions on trade and other matters. Unfortunately, anticipating what he’ll say (or tweet) remains pure guesswork. As a result, economic risk may be higher than the economic data implies.