The U.S. dollar traded higher against all of the major currencies on Friday including the Canadian dollar but even with the day’s rise, it is too early to declare a bottom in USD/CAD. Canada’s retail sales report was the most market-moving piece of data Friday and while it printed much worse than expected, the boost that it provided for the pair was short lived. The pair surged above 1.31 but the rally fizzled almost as quickly as it happened. The selling pressure is strong for one reason alone, which is that the U.S. dollar is weak. Economists had predicted a 0.3% rise in Canadian retail sales and the -0.1% decline caught everyone by surprise. It’s the first drop in 4 months and a big miss that was driven by weaker demand for food and alcohol. Consumer prices also dropped -0.2%, the first decline this year. The year-over-year rate was pushed down to 2% from 2.4%. Lower inflation is one of the central bank’s main concerns and when combined with the pullback in spending, we can understand why the Bank of Canada turned dovish this month. With oil prices falling 6 out of the last 7 trading days, we continue to believe that it will only be a matter of time before USD/CAD bottoms. Meanwhile, the best opportunities for selling the Canadian dollar will be the crosses. USD/CAD has been consolidating in a tight range for the past month while AUD/CAD and NZD/CAD have enjoyed nearly one-way gains. In the near term, we are particularly bearish CAD/JPY and EUR/CAD. As for USD/CAD, a bottom is near but we need to see a close above 1.31 for a bottom to be declared. 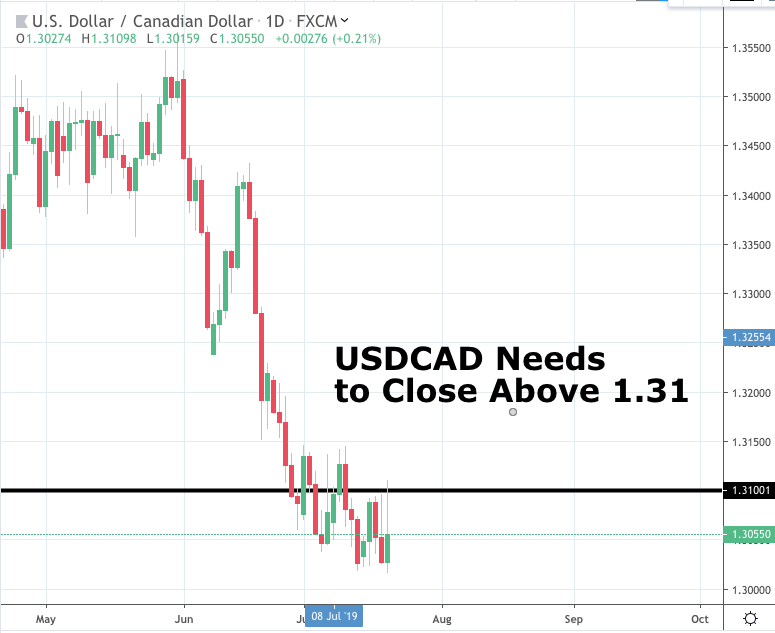 Meanwhile, the U.S. dollar plunged Thursday after Fed President Williams talked about taking a preemptive move with interest rates but on Friday morning, the greenback traded higher across the board as the central bank tries to correct the confusion between magnitude and timing. Yes, there’s no doubt that the Fed wants to ease and is likely to do so later this month, but as Fed President Bullard noted in an interview with Dow Jones earlier this month, a 25bp cut would be appropriate. The dollar is up the most versus the euro and yen. Weaker-than-expected German PPI pushed EUR/USD lower – the ECB meets next week and they are expected to set the stage for easing. Sterling is the most resilient but the losses in the New Zealand dollar was moderated by stronger-than-expected credit-card spending.