Trade tensions once again resurfaced on Friday and this time it appears they’ll be a factor for quite some time. U.S. indices–including the S&P 500, Dow, NASDAQ and Russell 2000–fell Friday, after the recent whipsawing on a potential trade resolution with China finally ran out of steam.

Equities reversed, ending what would have been a fourth straight week of gains. Yields plunged, extending their slide while the dollar reversed course, turning a weekly decline into a gain.

Investors Reverse Into Save Haven Assests

It all started when President Donald Trump clarified that he wouldn’t accept “a partial deal” with the world’s second largest economy based on Beijing increasing its purchases of U.S. agricultural products. Then, a delegation of Chinese officials canceled a scheduled visit to Montana farms. Investors, who have had to quickly become geopolitical analysts, sold off risk assets and jumped back into safe havens such as the yen, gold and Treasurys.

Though we have been cautious of market risk for quite some time, we find it noteworthy that President Trump made no follow-up statement on the subject. His twitter account instead focused on domestic politics. Did investors make a bigger deal about Friday’s developments than was necessary?

Meanwhile, officially, trade meetings remain on the docket. However, we’re skeptical that the Chinese are incentivized to compromise with an embattled president ahead of the 2020 U.S. election. We believe investors, and markets, are likely going to be mired in this for the long haul.

The S&P 500 dropped 0.51% for the week. Consumer Discretionary shares were the obvious weekly underperformer, -2.46%, as well as one of Friday’s two laggards, -1.15%, illustrating the direct link to the renewal of trade fears. On the final day of last week’s trading, Technology was the worst performing sector, -1.17%, a result of its centrality in the dispute, particularly to issues of patent theft and national security. 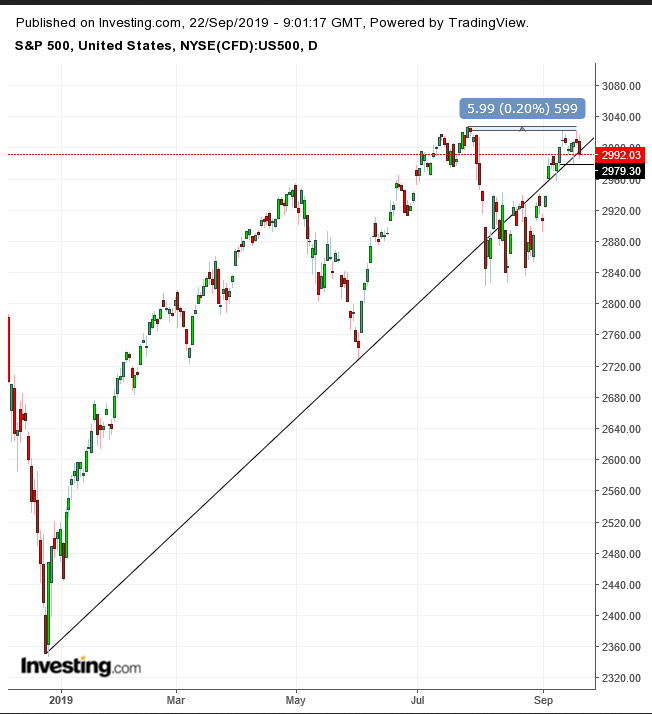 From a technical perspective, Friday’s close–which was the lowest for the benchmark index in a week–fell back slightly below the uptrend line since the December bottom. The index jumped back above it on Sept. 5 after falling below it precisely a month earlier.

Thursday’s high was just 0.2% from the index’s all-time high, hit on July 26. A fall below Wednesday’s 2979.40 trough would complete a small double top. The index may find strong support at the August congestion. 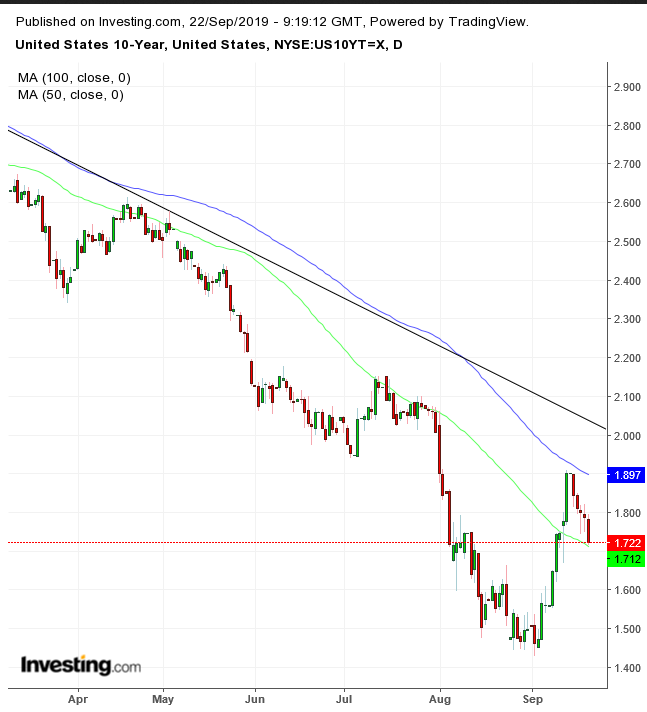 Yields on the 10-year Treasury note slid for a fifth day. What started as a sudden bargain after the Fed may have put the brakes on additional rate cuts turned into a haven amid the renewed US-Sino tensions. Technically, the rate is being squeezed between the 100 and 50 DMA, below the downtrend line since November. 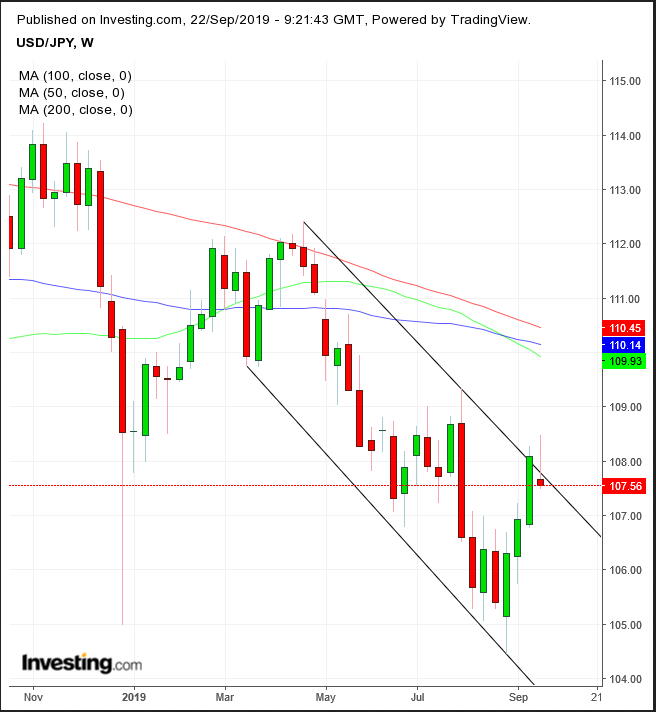 The yen surged on Friday, even against a strengthening dollar. From a technical perspective, the weekly trade activity developed a shooting star which halted a three straight week advance, at the top of a falling channel, suggesting a resumption of the downtrend to retest the 105.00 levels. 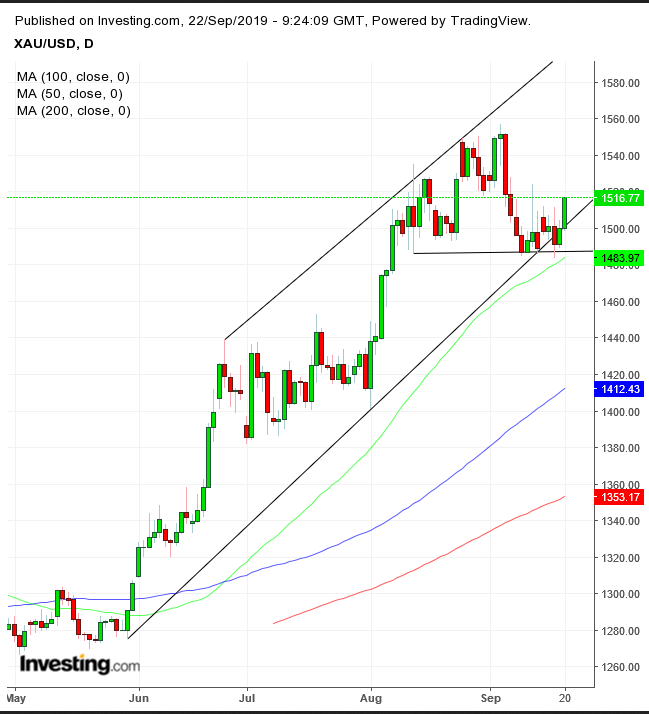 Gold’s trajectory was the same as the yen. The yellow metal ended a three-week slump on Friday. Technically, too, it bounced off the bottom of a falling channel. Should this uptick continue, it would blow out a H&S top, propelling the commodity even higher.

Oil trimmed most of its biggest intraday gains on Friday, but retained its biggest weekly accumulation of the year after last weekend’s drone attacks on an Aramco production facility and Saudi oil field caused the commodity to jump 20% higher at last Monday’s open. Risk, however, remains. Saudi Arabia warned that if the attack was proven to be from Iran the Desert Kingdom would consider it an act of war.

For Iran’s part, the country’s Foreign Minister Javad Zarif threatened that war may be unavoidable, even if he tempered the remarks by insisting Iran will not make the first move. In another address he quipped that Saudi Arabia and the UAE are willing to fight his country “to the last American.” 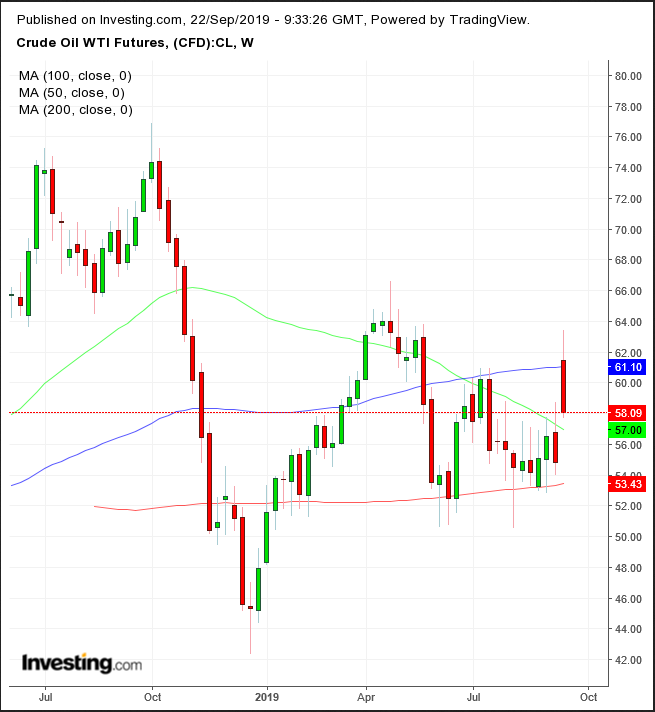 Technically, oil’s medium-term uptrend has yet to prove itself after last week’s advance fizzled, distancing the price from the April peak to establish an uptrend.

All times listed are EDT