As the European Central Bank (ECB) returns to stimulus in a sign of desperation amid increasing signals of a global slowdown, we expect volatility will rule the markets this coming week.

After suffering the worst selloff of the year last week, U.S. stocks rebounded Friday, for a second day, on hopes that European measures, which included reports that Germany might be willing to run a budget deficit in order to spur economic growth, would provide a positive counterpoint to the ongoing trade rhetoric. Still, equities finished lower on the week, for a third consecutive time.

Similarly, yields–which were at the heart of the selloff–rose Friday but plunged for the third straight week. The dollar advanced for a fourth day. Oil rose for the first week in three.

A short-lived rally early last week–spurred by the U.S. decision to delay levying new tariffs on China till after Dec. 15–ended after disappointing German and Chinese economic data exacerbated simmering concerns of a global slowdown, deepening the 3-month to 10-year yield curve inversion, inverting the 2-year:10-year curve and pressuring the 30-year yield which reached a record low of 1.916% on Thursday.

Nonetheless, investors bid up stocks Thursday, after the reports of major ECB stimulus turned the selloff into a buying dip. Olli Rehn, Finland’s central bank governor and a member of the ECB’s rate-setting committee, said the eurozone central bank is getting ready to deliver a “very strong” stimulus package.

Traders became euphoric on Friday, driving up all four major U.S. indices to over a percent gain each, with the Russell topping 2%.

The S&P 500 rose +1.44% Friday, with every sector in the green. Industrials outperformed, +1.93%, followed immediately by Technology, +1.87%, boosted by chipmakers after NVIDIA (NASDAQ:NVDA) sales and profits beat expectations, and Materials, +1.78%–all trade-sensitive sectors. Financials rebounded, +1.76%, even as the yield curve steepened. 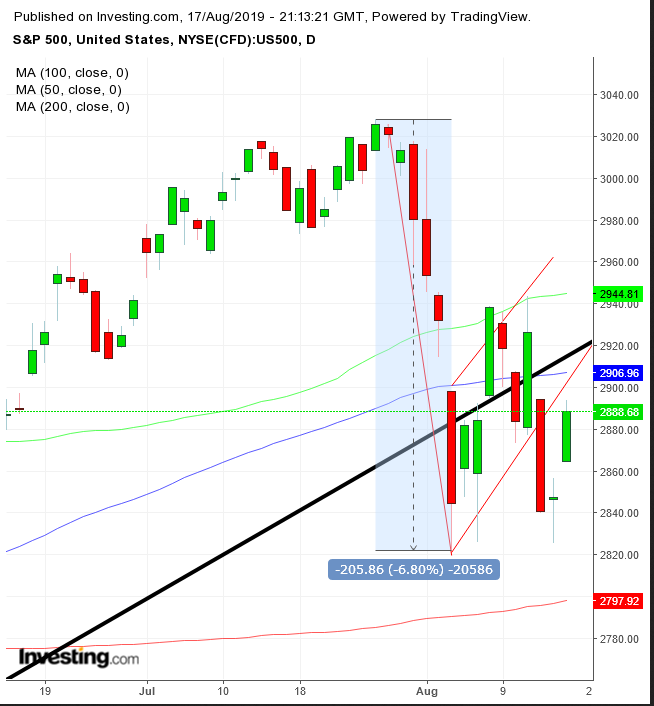 Technically, the rebound of the benchmark index was a return move after the price completed a rising flag, bearish after the 6.8% top-to-bottom drop between July 26 and August 5. It was also its third day below the uptrend line since the December bottom. A drop below the 2,800 level, crossing below the 200 DMA, would establish a downtrend in the medium-term. 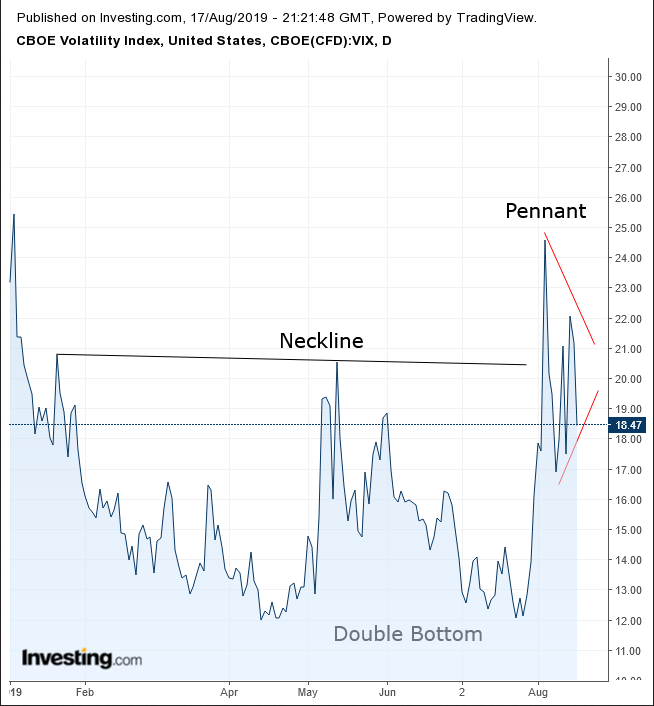 The VIX may be signaling that equities will return to selloffs. The supply-demand balance completed a double bottom and the price is consolidating right on the neckline forming a pennant continuation pattern.

An upside breakout will signal continued volatility, which tends to unnerve investors, driving them into a selloff. The VIX closed at the bottom of the pennant, raising the probability of a volatility spike. 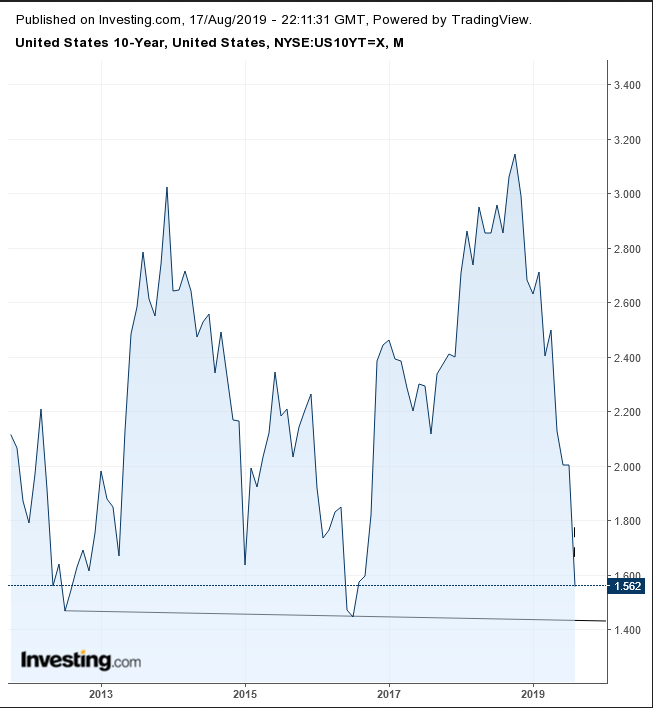 After 10-year yields completed a bearish flag, they are now on course for additional declines. As things stand, the monthly chart is showing signs that 10-year yields will test the 1.4 level.

After posting its lowest rate on record Thursday, the 30-year closed slightly higher, at 2.044. That increases the possibility 10-year yields will resume their slide. 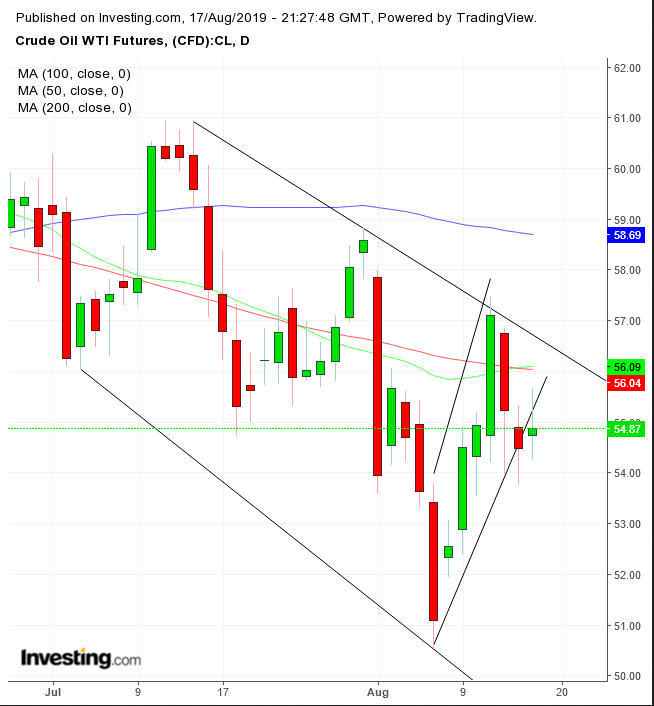 Oil was boosted after reports of Germany’s possible pledge of stimulus offset demand concerns. Technically, however, we expect oil will return to its downward trajectory, after it fell below its August uptrend line, set to resume its falling channel since July.

Also, oil’s technicals suggest volatility as the 50 DMA managed to climb back on top of the 200 DMA after falling below it during July.

All times listed are EDT

21:30: Australia – RBA Meeting Minutes: Investors are eager to find out more details after the Aussie central bank shocked markets by easing rates twice since June, as the RBA considers “extreme measures” to save the land down under’s economy. 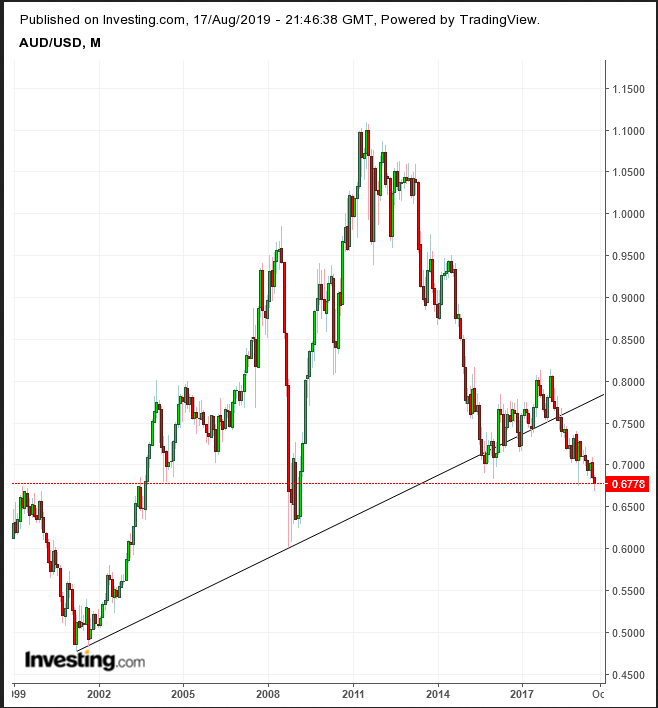 The Aussie dollar reached its lowest level since early 2009, after falling below its macro uptrend line during April 2018, in effect since 2001.

14:00: U.S. – FOMC Meeting Minutes: Markets are looking for clarification on the most recent quarter-percent rate cut, since some were expecting double that. Also, Fed Chair Powell was positively hawkish relative to how dovish expectations were, describing the cut not a policy shift but rather a midcycle policy adjustment. 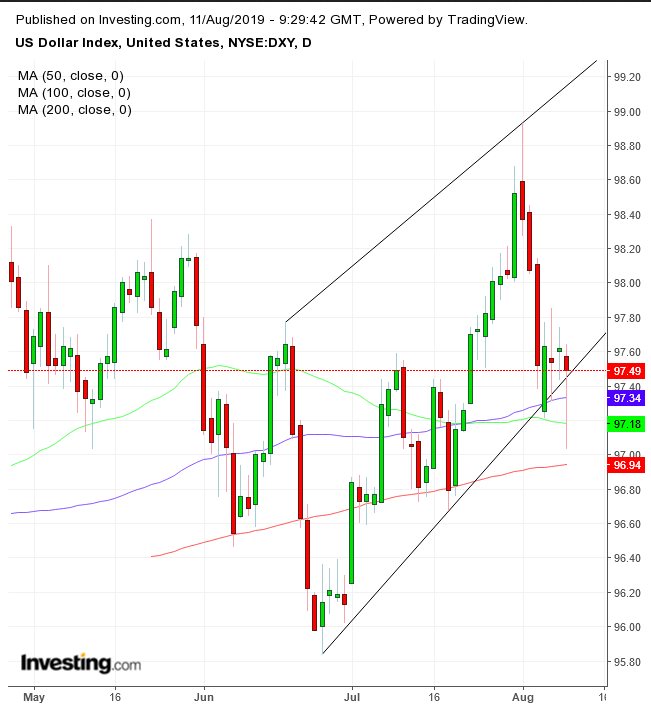 However, with Asia-Pacific banks in easing mode, markets are expecting additional cuts before year end. If the Fed doesn’t give investors what they want, we could expect newfound demand for the dollar, which finished the week at its highest weekly close since May 2017, after triggering a golden cross in May, for the first time since 2012.

The greenback has to overcome the resistance at 99.00, a result of the extra long-stemmed shooting star two weeks ago, which would clear the path to resume the trend along the rising channel.

10:00: U.S. – Fed Chair Powell Speaks: The market might expect a dovish Fed announcement at the Jackson Hole Symposium, which begins on Thursday, after Germany and Europe announced a return to stimulus.