We have cut our yield forecasts a little further. We are now even more certain that both short-term and long-term yields are set to stay low for the rest of 2019 and far into 2020.

We have pushed back our call for the next ECB rate hike (policy rate currently at -0.40%) from H2 20 to early 2022. As such, we no longer expect the fixed income market to price rate hikes during H1 20. 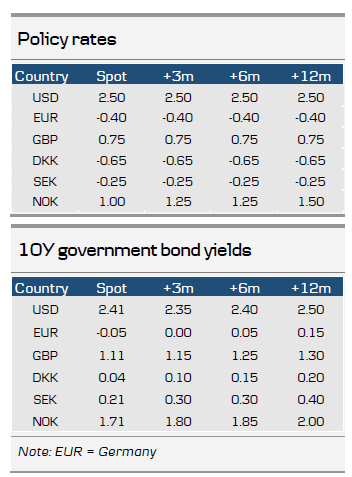 As a result, we expect German Bund yields to trade at close to zero for the next 12 months. Risk appetite will be the main determinant of yield levels. Due to the trade conflict, risk aversion is currently high, but we expect it to subside slightly on a 12-month horizon. We expect 10Y Bund yields at 0.15% (0.30%) 12 months from now. 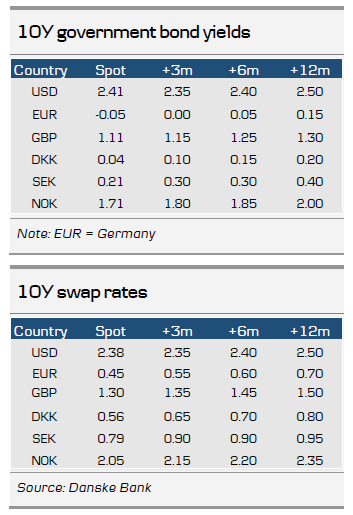 According to most market participants over the past few years, it has been only a matter of time before the ECB would begin to normalise interest rate levels. The view was that at the end of the day negative yields are an ‘extraordinary’ situation, and that the ECB would take steps to normalise rate levels once the eurozone output gap contracted and wage pressures mounted, initially by eliminating negative rates. That has helped keep 10Y Bund yields in positive territory other than in periods of uncertainty such as the current one, and it has held the 2Y-10Y yield curve at a ‘normal slope’.

We would argue now that the situation has reversed. Economic growth and inflation quite simply do not look likely to go high enough in coming years to offer the ECB an opportunity to hike its policy rates. That means we would not see the expected upward pressure on interest rates resulting from markets pricing rate hikes once risk aversion subsides or the underlying economy recovers.

Economy performed better than expected in Q1 19, but recovery threatened by trade war

We would emphasise that our postponement of the first ECB rate hike does not reflect an expectation of the eurozone economy moving into recession in 2019. In Macro-monitor Eurozone, 13 May, our macro-economists argue that the risk of a recession in the eurozone has eased – with data painting a more optimistic picture in recent months which has been confirmed by the GDP data for Q1 19, which delivered an upside surprise, as growth came out at 0.4% q/q. It would also appear that manufacturing is no longer a drag on growth, while Italy has emerged from recession with q/q growth of 0.2% in Q1 19. The German economy, too, appears to have more wind in its sails despite the low Q1 PMI figures.

We have to underline, however, that the latest twists and turns in the trade conflict between the US and China have not yet been reflected in the numbers, so there is a risk the economy could again disappoint – and indeed recent PMI figures have been mixed.

The low level of inflation has long been a major headache for the ECB, with core inflation in particular being too low. In this inflation research from 13 May, our eurozone economist argues that core inflation is likely to rise from an average 1% since the start of 2018 to 1.3- 1.4% by the end of 2019. However, in our view, this is unlikely to prompt the ECB into reopening the discussion on normalising monetary policy, or the market to buy into imminent rate hikes for that matter – the inflation level is still too far from the 2% target.

Earlier this year, we argued that rising US 10Y yields would push eurozone 10Y yields higher. However, there is now much to suggest that causality in 2019 would be the other way round. Uncertainty about the trade war between the US and China has caused the market to start pricing US rate cuts, although – given the strength of the US labour market – we do not envisage the Fed cutting rates. The market will likely disagree with us, though, and keep pushing rate cuts back in coming quarters without cuts ever actually materialising. In combination with 10Y yields of close to zero in both Japan and Germany, we expect this to keep US yields low, with investors being pushed towards the US. 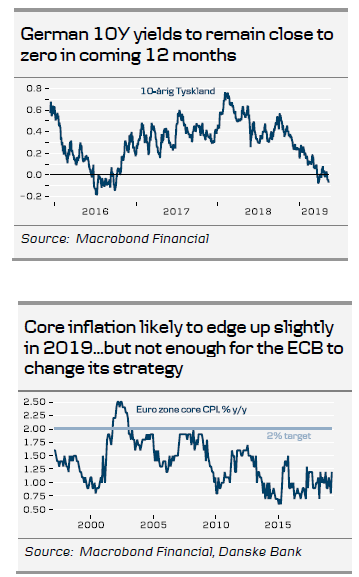 Given multiple uncertainties and recent announcements from the ECB, we continue to expect no noticeable increases in 10Y Bund yields over the coming 12 months. 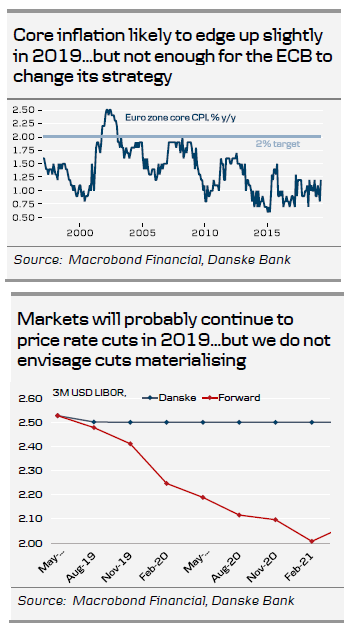 As such, we expect the benchmark Bund yield to trade in a narrow range between -0.1% and 0.25% for the next 12 months. Where precisely it would trade within that range will depend mainly on risk appetite.

We expect to publish the next issue of Yield Outlook by mid-June 2019. 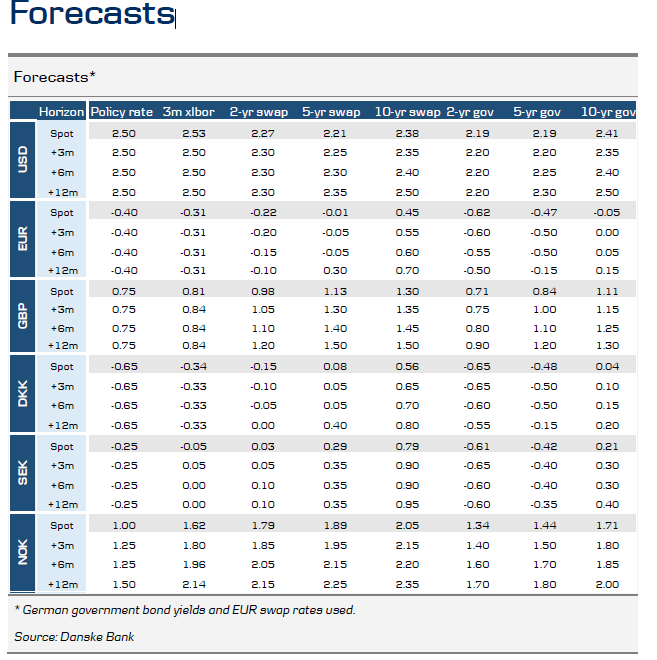 No rate hikes for the next 12 months, as we expect Danmark’s Nationalbank to shadow the ECB 100%. 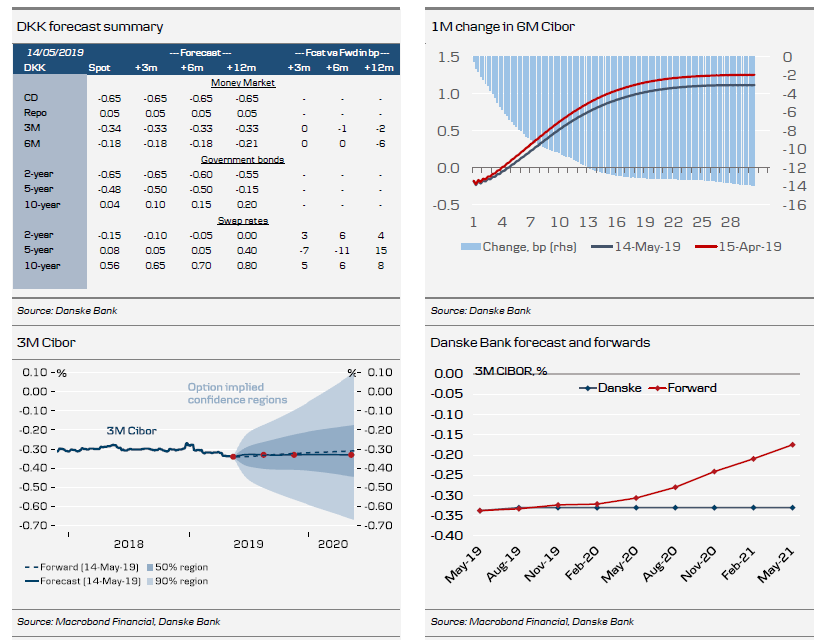 The eurozone economy currently looks weak, although we are seeing nascent signs of improvement, primarily in the service sector. We therefore still expect the economy to pick up further over the course of 2019, though the US-China trade war has taken uncertainty to exceptional highs. 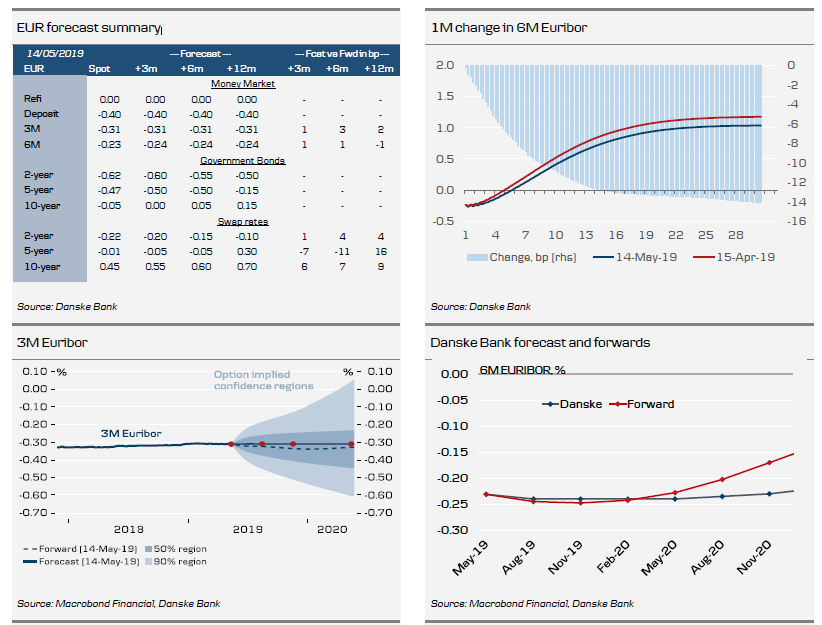 The Fed is firmly on hold due to concern about lower global economic growth and still modest inflationary pressures in the US economy – notwithstanding continued GDP and job growth in the US.

As such, we expect the Fed to keep rates unchanged over the next 12 months. Markets, on the other hand, are pricing almost three 25bp rate cuts by the end of 2020. We expect only modest upward pressure on 10Y US yields this year, as low eurozone and Japanese yields, low inflation, rate cut expectations and concern about the trade war are putting a lid on long-term US yields. 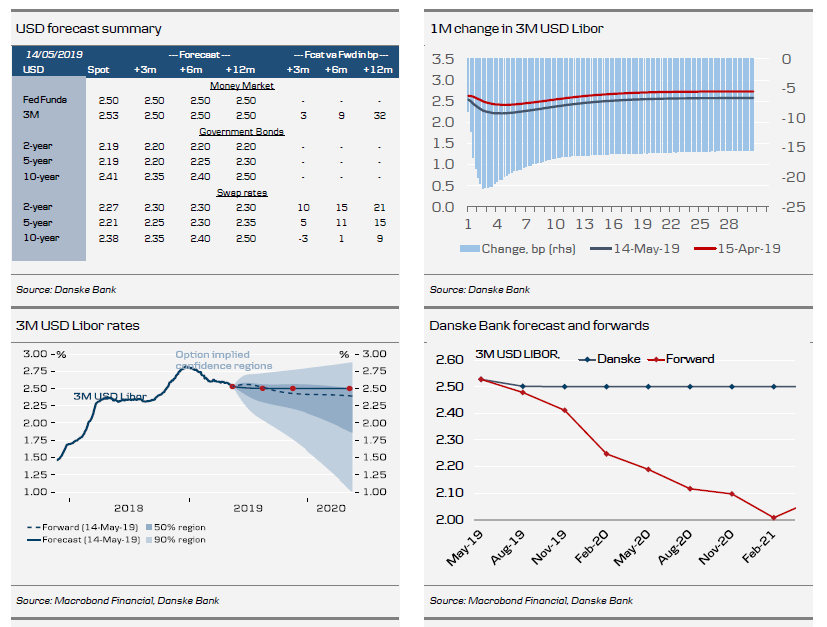 While we do not expect a ‘hard’ Brexit, the Bank of England does not seem likely to hike rates within the next 12 months, in our view.

Long yields likely to tick upwards slightly in 2019 as the market begins to price rate hikes in 2020.

To read the entire report Please click on the pdf File Below..