The Federal Reserve cut interest rates by 50 basis points to a range of 1% to 1.25% in an emergency move earlier this week, citing the “evolving risks” of the coronavirus to the U.S. economy. The last time the Fed made a rate cut between scheduled meetings was in October 2008 at the height of the global financial crisis. 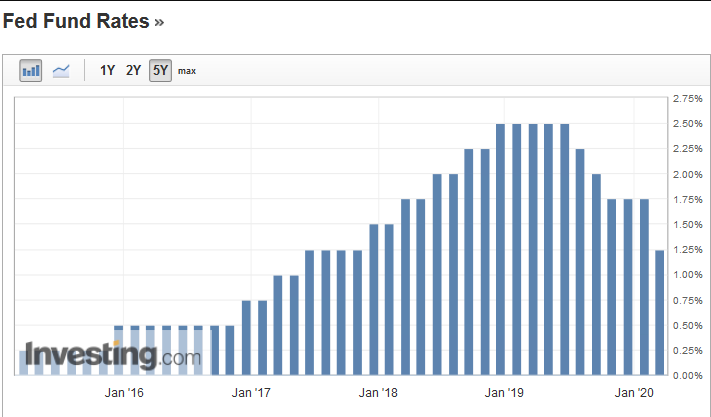 The U.S. central bank may not be done lowering interest rates, either. Futures traders are betting on another half percentage point cut being put in place when the Fed meets later this month.

As the Fed further eases borrowing costs, these three stocks have the potential to deliver strong returns in the months ahead:

The first name to consider hails from the gold mining sector. Expectations of monetary stimulus and lower interest rates tend to benefit gold, which is currently trading just below its highest level in seven years.

Newmont Goldcorp (NYSE:NEM)–formed from the merger of Newmont Mining and Goldcorp in April 2019–has seen its stock outperform the broader market in recent weeks. Shares, which have soared around 12% so far this week and are up 48% over the past 12 months, ended at $51.00 on Wednesday. They reached their highest level since November 2012 at $51.34 on Mar. 3.

The Greenwood Village, Colorado-based company has benefitted from both a sharp increase in gold prices and higher production volumes. Newmont Goldcorp’s Q4 average saw gold prices jump 20% from the year-ago period to $1,478 per ounce, while output increased 27% year-over-year to 1.83 million ounces.

Looking ahead, the corporation expects attributable gold production for 2020 to be 6.4 million ounces and all-in sustaining costs for gold to be $975 per ounce sold. As long as the yellow metal’s prices keep appreciating, robust performance looks set to continue.

Newmont also announced plans to increase its annual dividend by 79% to $1.00 per share, another move that will benefit investors.

Realty Income (NYSE:O), based in San Diego, California, owns 5,797 properties totaling 93.3 million rentable square feet. The corporation focuses on businesses that are less threatened by e-commerce or recessions, such as convenience store chains like Walgreens and 7-Eleven.

Realty Income beat estimates on both the top and bottom lines when it released fourth quarter earnings on Feb. 19. Earnings per share totaled 39 cents, surpassing expectations of EPS of 35 cents and representing a 35% increase from 29 cents in the same period a year earlier. Revenue also climbed 20% from the year-ago period to $394.2 million, above forecasts of $382.5 million.

Even more promising, adjusted funds from operations, a more accurate measure of REIT profitability than net income, climbed to 86 cents per share from 79 cents in the fourth quarter of 2018.

The company is also one of just a few REITs that pay dividends monthly, rather than quarterly. Realty Income offers a monthly dividend of $0.2325 per share and a yield of 3.74%.