As this historic selloff in equity markets continues, the temptation to buy stocks is also high. Investors who were left out in the unprecedented boom of the past decade have long waited for a market ‘correction’ of this magnitude to buy their favorite stocks at extremely low prices.

There is no harm in being smart when others are fearful. This is the instinct that Warren Buffett, one of the most successful value investors, urges in highly distressed market conditions like the one we’re currently experiencing.

But as you get ready to make your move in this bear market, we also want to highlight the stocks which, in our view, don’t make good candidates for our buy-on-the-dip strategy. Here are two names that fit in this category:

Global travel bans and potential airline bankruptcies are likely to put further pressure on Boeing (NYSE:BA) stock, which was a great turnaround bet for 2020 just before the coronavirus pandemic changed everything.

With a lot of uncertainty surrounding the travel industry and the future of its flagship 737 MAX plane hanging in the balance, it’s hard to see the bottom for Boeing’s stock, which lost about a quarter of its market value as of yesterday’s carnage.

The stock fell about 24% during Monday’s trading to close at $129.61. The market rout of the past month has wiped out all the gains that the world’s largest plane manufacturer accrued in its rally that began in September 2016. 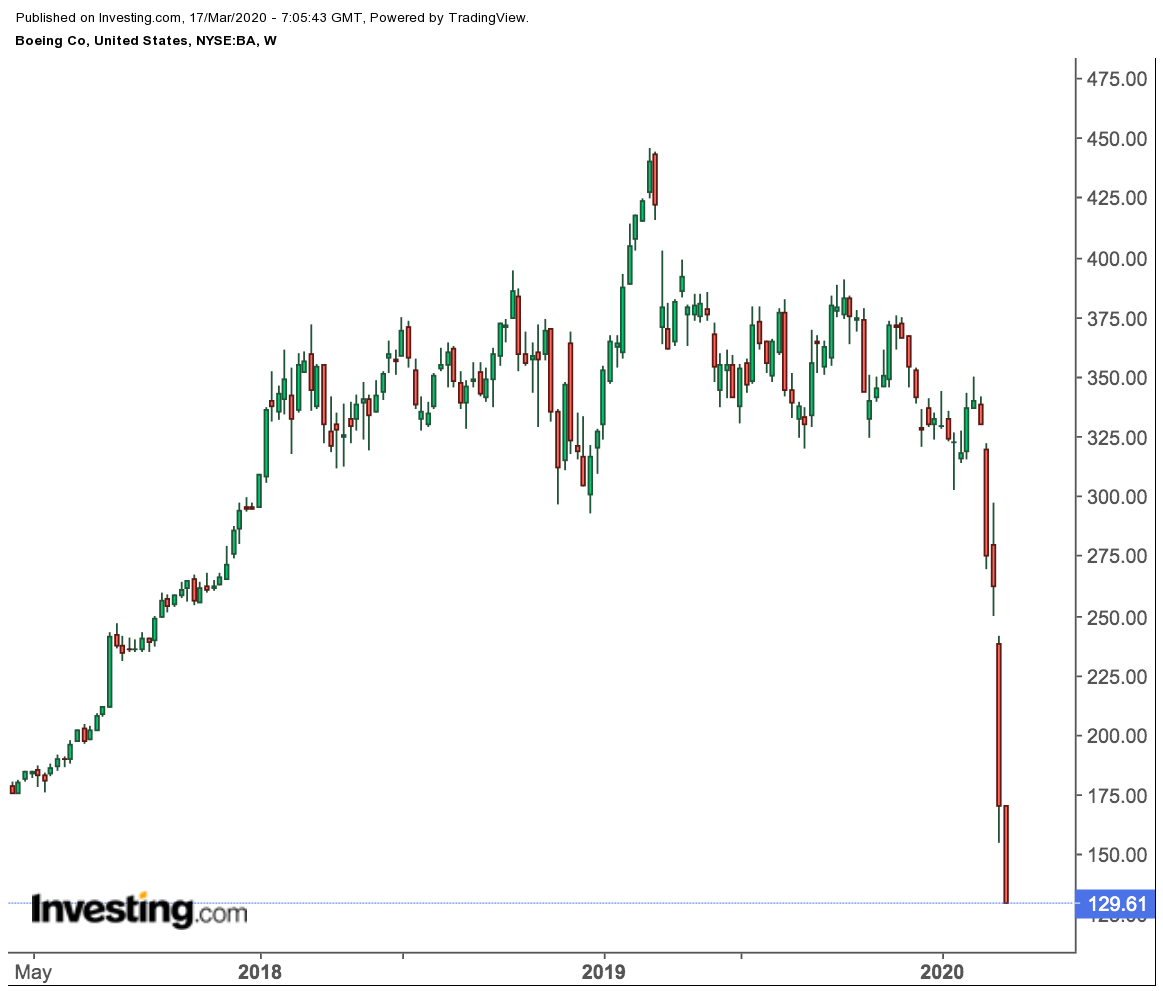 The embattled Chicago-based aviaton company is facing an array of headwinds right now. Last week it told employees it was immediately suspending hiring as well as implementing other measures to preserve cash. These moves come as the fast spreading coronavirus drastically cut air travel and damaged airlines worldwide.

Before the company’s recent measures to preserve cash, Boeing was already reeling from the damage of two fatal crashes of its 737 MAX that claimed 346 lives and forced regulators globally to ground the plane which is so crucial for the company’s future growth.

The current slump is raising speculation that the next step in Boeing’s push to preserve cash could be a cut in its once rock-solid dividend. JPMorgan, while downgrading the stock last week, said that may be in the cards as the company faces diminishing price target calls across Wall Street.

Tesla (NASDAQ:TSLA) had a great run before the recent rally began to unravel. Its stock surged four-fold in the nine months to Feb. 17 on very strong signs that the troubled electric car maker had turned the corner by overcoming its production challenges.

The company beat analyst revenue estimates for 4Q and accelerated the introduction of its new Model Y crossover. As well, the completion of its Shanghai factory in record time and Tesla’s success in exceeding its ambitious goal of selling 360,000 vehicles in 2019 also offered a powerful signal that the Palo Alto, CA-based company could rapidly become a meaningful industry player if it continued to meet its targets.

But the bullish demand case for Tesla cars has weakened significantly with major economies potentially slipping into a recession, triggered by the coronavirus pandemic.

“At current levels, Tesla stock remains high enough that it takes very aggressive assumptions on its future auto business to justify its valuation on a [discounted cash flow] basis,” Bernstein analyst Toni Sacconaghi said in a note to investors yesterday. 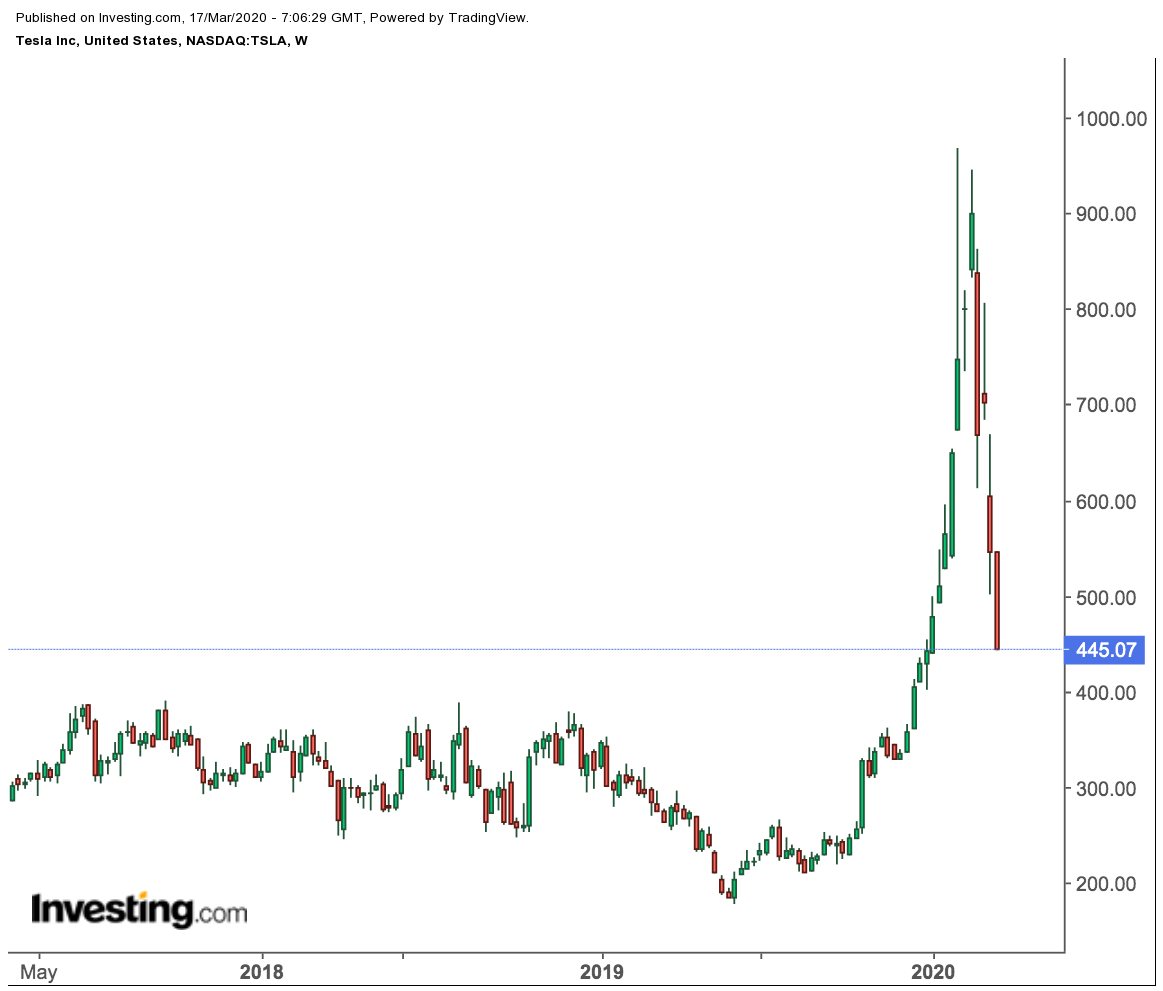 A major economic contraction in China is a significant challenge for Tesla in particular because a large proportion of the company’s growth trajectory is dependent on that country, one of the major global markets for electric cars.

Sino fixed asset investment for January and February dropped 24.5% from the same period last year. China’s industrial production was down 13.5%, with automotive output tumbling 46%. Tesla aims to sell 500,000 vehicles this year. This goal may now prove hard to meet, some analysts say.

“Given the demand overhang from the coronavirus outbreak in China as well as Europe we believe that 1Q unit demand levels will be difficult to hit for Tesla and is a dynamic currently being factored by the Street,” Wedbush Securities’ analyst Dan Ives wrote in a recent note to investors.

The outbreak of coronavirus has badly damaged the investment case for both Tesla and Boeing. These stocks don’t seem to have reached a bottom yet, especially when the worst of this pandemic is yet to come.