The summer boom may be over but there are still insects feeding from the sea hollies in my garden. There’s nectar in their steely grey tops though the lower flowerheads are browning and going to seed. White-tailed bumblebees work fast, probing the tiny clusters of five flowers, interspersed with spiny barbs, that are rhythmically arranged in tall domes. This is Eryngium giganteum, also known as Miss Willmott’s Ghost, which is named after Ellen Willmott, an early guerrilla gardener who left a trail of seeds in the gardens she visited.

I’ve seen the native wild eryngo, E maritimum, growing in the gravels of the north Norfolk coast. A shorter plant, its flowers are metallic blue and burr-shaped and, like my garden variety, protected by a silver ruff of viciously spiked bracts. Sea hollies are actually umbellifers and, like so many of the apiaceae, very attractive to insects, in this case to wasps in particular.

Hoverflies are now zipping between the flowers and a small copper butterfly is sunning itself in the cup of a pale bract. The sharply spined leaves are sheltering the plump button of a strawberry snail.

A spider has anchored its nest to flowers and stems, linking the tops of the sea hollies in a seemingly random series of fine threads. Wisps of thistledown and grass seeds are caught in this chaotic criss-cross mesh. Inside the cat’s cradle of spiderweb is a darker shape, a fleecy rolled-up swaddle blanket studded with shiny petrol-blue fragments of bluebottle, the husk of a wasp. Within this spun chamber is a blue egg-sac from which has emerged a mass of tiny spiderlings with pale olive legs and little round bodies. 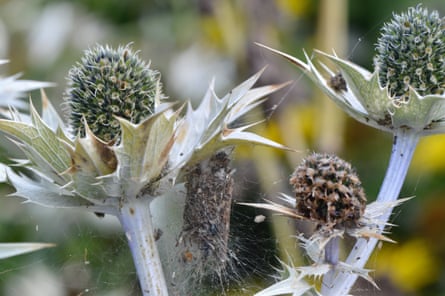 The mother has long thin legs with dark knee joints, her rotund body a symmetry of brown white and black markings. She’s a mothercare spider, Theridion sisyphium, feeding her young on regurgitated food until they are large enough to share her meals. When she dies, they will eat her body before they venture out across my garden. Frost will pick out the shapes of the sea hollies, the wind will tatter them and in spring when I’m gardening I will find the lacy and beautiful skeletons of their bracts.