Macy’s Inc (NYSE:M) will have to do something spectacular to reverse the damage its slowing sales have inflicted on its share price. But there’s little chance the department-store chain will show the turnaround it needs when it reports its first-quarter earnings tomorrow before the market opens.

The retailer shocked investors early this year by cutting its full-year earnings expectations, citing weakening sales in categories such as women’s sportswear, fashion jewelry and cosmetics. That disappointment came in the middle of one of the best growth periods for other retailers as they benefited from the strength of the U.S. economy and robust consumer spending.

If Macy’s couldn’t benefit in this generally enabling operating environment for retailers, there’s little hope that it can make things work when the economy is losing its steam. As well, the escalating trade war with China is likely to intensify cost pressures and hurt consumer sentiment.

These concerns have kept investors on the sidelines, hurting Macy’s shares badly this year. The stock, which closed down 3.9% at $21.58 on Monday, has dropped in 10 of the past 12 trading sessions. It’s plunged 28% this year — losing about half of its value from the peak it reached last summer. 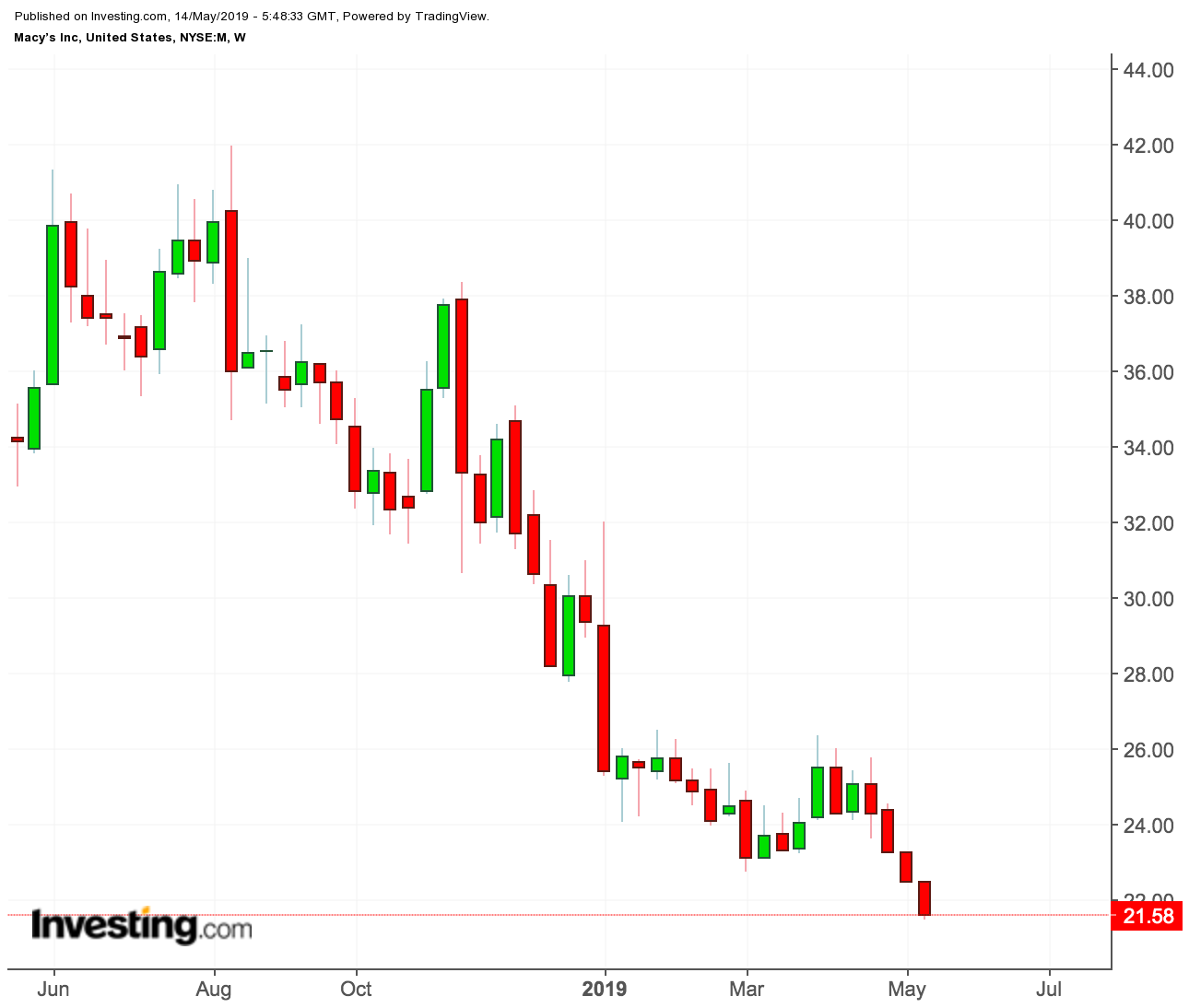 For the quarter that ended in March, analysts are expecting profit per share to decline to $0.33 from $0.48 a year ago. Sales are likely to remain almost flat $5.52 billion, according to analysts’ average estimate.

Macy’s CEO Jeffrey Gennette has attempted a variety of new formats at its retail stories to try to win back customers and survive amid the e-commerce onslaught that has threatened the traditional brick-and-mortar retail model.

Along with its online success, Macy’s is also cutting costs and it’s expected that the store-operator will release a savings goal for the next three to five years later this year. Still, in the longer term, Macy’s needs to show that its cost-cutting, new spending and store remodeling are breathing new life into actual sales.

Traffic at stores and growth in sales are the crucial measures at this juncture, and will be the numbers that investors monitor most closely when the company releases its earnings report.

We don’t see Macy’s stock recovering its ground in 2019, even after the massive sell-off during the past six months. Due to the company’s uneven path to recovery, it doesn’t make sense to bet on this retail stock this year. In our view, investors would be better off staying on the sidelines and waiting to see how the current turnaround efforts pan out.