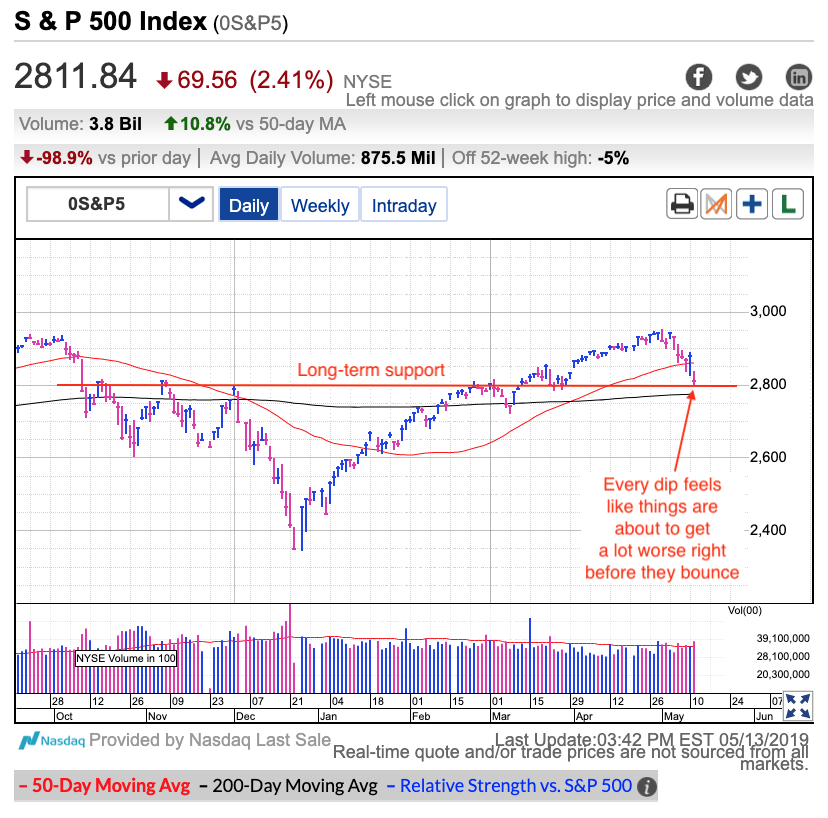 I normally publish these posts on Tuesday and Thursday evenings, but Monday’s dramatic tumble warrants a special edition.

The S&P 500 tumbled Monday in the second largest drop of the year, shedding 2.5% after Trump and China escalated their trade war to the next level. Last week, Trump followed through on threats to increase tariffs to 25% and China retaliated this weekend with reciprocal tariffs. As bad as it sounds, stocks are still holding critical 2,800 support, even if just barely.

While dramatic, no one should have been surprised by Monday’s tumble. On May 2nd when prices were near all-time highs, I told readers to be mindful of a larger pullback to support:

“If prices tumble under 2,900 and finish near the day’s lows, that is a very bearish development and it means further selling is ahead of us. The most obvious next level of support is 2,850. After that, far more meaningful support is back at 2,800. While it would feel scary, either of these would be reasonable levels to test in a normal and routine pullback. Two steps forward, one step back.”

Here we are 11 days later and traders are running around like the world is ending. The thing to remember is these things are not nearly as scary when we see them coming and can develop an intelligent trading plan ahead of time.

Markets go up and markets go down. That’s what they do and everyone knows it. Pullbacks to support happen all the time and shouldn’t surprise anyone. Yet they always do. By rule, they have to. If they didn’t, no one would sell and we wouldn’t dip in the first place. Every dip, no matter how trivial it looks after the fact, always felt real in the moment.

And now that we find ourselves at support, we have to ask ourselves if this is just another routine, buyable dip. As I already stated, every dip feels like it is about to get a lot bigger. That’s the only reason people sell the dip. Yet every dip in history ended in a bounce. And every time, that bounce happened when people were the most pessimistic.

Are we at that point now? In a normal market, yes, we are moments away from the bounce. Maybe prices dip under 2,800 before supply dries up and prices bounce. Or maybe we already hit that capitulation point Monday afternoon. Either way, we are only talking about a handful of points. A dip buyer would be sitting on nice profits next week or the week after even if they got in a little too early or a little too late.

But that is only if this is a normal market and this is a routine pullback to support. That means the million dollar question is whether this pullback is normal or abnormal.

The edge case occurs when things get wonky and the market goes into full-blown panic mode. Not only do the typical Chicken Littles run around claiming the sky is falling, but the far more confident dip buyers have second thoughts. That is what happened last year when prices tumbled more than 400 points in December.

Could that happen here? Sure. It can happen anywhere at any time and is one of the biggest risks to owning stocks. But as bad as it is, these panics are rare.

The line in the sand is 2,800. This support level stretches back to last fall’s big selloff and was major resistance for several months. Once prices finally break through resistance, it becomes support. And right now it is our lifeline.

Hold this level for a few days and all is good. The thing about stock crashes is they are brutally quick. They happen before people have time to think and make rational trading decisions. This is the land of sell first and ask questions later. But if that is how this works and the market holds 2,800 support for several days, then we can be fairly certain the emotional selling died up.

At least as far as last week’s headlines are concerned. Meaning it would take a new round of headlines to knock us lower.

But here is the thing about this latest round of trade war headlines: how much worse can they get? Both sides are already taxing so much they are quickly running out of new things to tax. Even if this doesn’t get solved, we are not far from the point where this cannot get any worse simply because both sides are running out of options to make it worse.

In my opinion, the headlines over the last seven days were the worst of what we will see. The market was blindsided by this escalation since it was anticipating a deal. But after the shock wears off and the market comes to terms with these headlines, most of the downside will have already been realized.

The thing to remember about falling stock prices is they are actually less risky to buy. That’s because a lot of the damage has already been realized. People are afraid of falling off of buildings, not falling off the ground. Yet paradoxically in the stock market, people are most comfortable on the top of tall buildings and most afraid when standing on the ground. Even though prices could fall a little further today, tomorrow and the day after, it is still far less risky to buy today’s dip than last week’s highs.

Most Likely Next Move: This is a buyable dip and if the market didn’t bottom Monday, it will happen Tuesday or Wednesday.

Trading Plan: People pray for a dip so they can get in at cheaper prices. But every time the market answers their prayers, they lose their nerve. Don’t lose your nerve.

If I’m Wrong: Prices tumble under 2,800 support and the reactive selling intensifies instead of dries up. Dipping under 2,800 is okay as long as we bounce back above not long after. But if we crash through support and finish the day at the lows, fear is taking over. But rather than fear the fall, take comfort in knowing even better bargains are coming.