The short seasonal rally for gold that typically follows India’s Akha Teej holiday (May 7 this year) is in play but this time it is being “juiced” by a major US stock market meltdown!

In a game with nine innings, the US business cycle is probably in the eighth or ninth inning.

Stock market welfare programs provided by central banks (QE and intense rate cuts) have extended the bull market in stocks. QE is a vile form of corporate socialism. Horrifically, QE is maniacally embraced by governments around the world.

The debt worship, which is particularly prevalent in America, has exponentially increased the danger of a 1929-style global stock markets crash. Ominously, it’s happening as the business cycle peaks and a wave of de-dollarization is racing across the globe.

US oil company profits have played a big role in overall stock market earnings, and oil suddenly looks quite shaky.

The tech-weighted Nasdaq has done better than the Dow in recent years, but the latest tariff tax tantrums thrown by US and Chinese governments could become big nails in the overall earnings growth coffin. 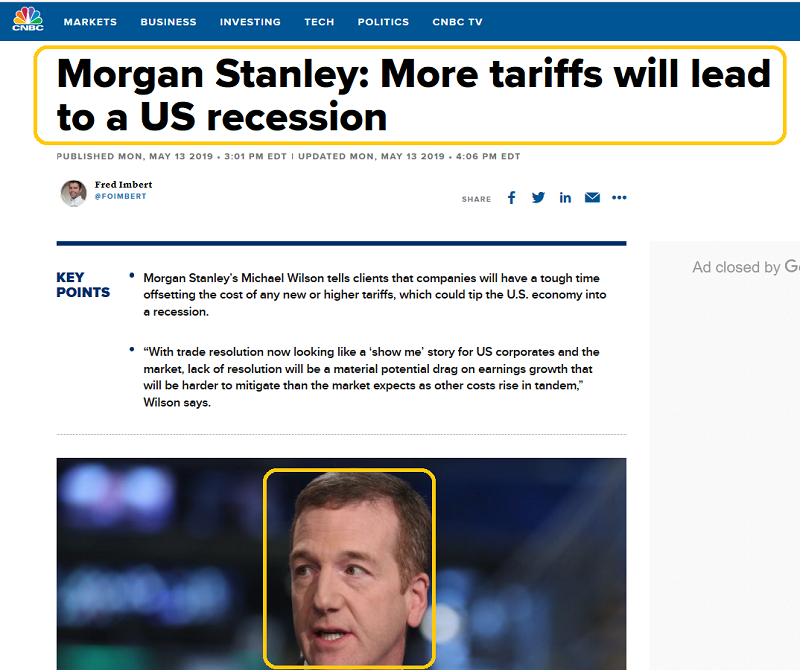 Mike Wilson is one of America’s most influential stock market analysts. He suggests that America is headed for recession if more tariffs are coming. I’ve predicted more tariffs are on the way, and here to stay!

The tariffs are here for the long-term because the decline of America as lead empire is long-term. Some major bank economists and analysts are also beginning to adopt this view.

My guswinger.com swing trade service caught all the latest downside action in the Nasdaq as well as the stunning rally in the dollar against the yuan in the FOREX market. These swing trades are mechanical. They are not influenced by US government “world growth leader” propaganda and debt worship. 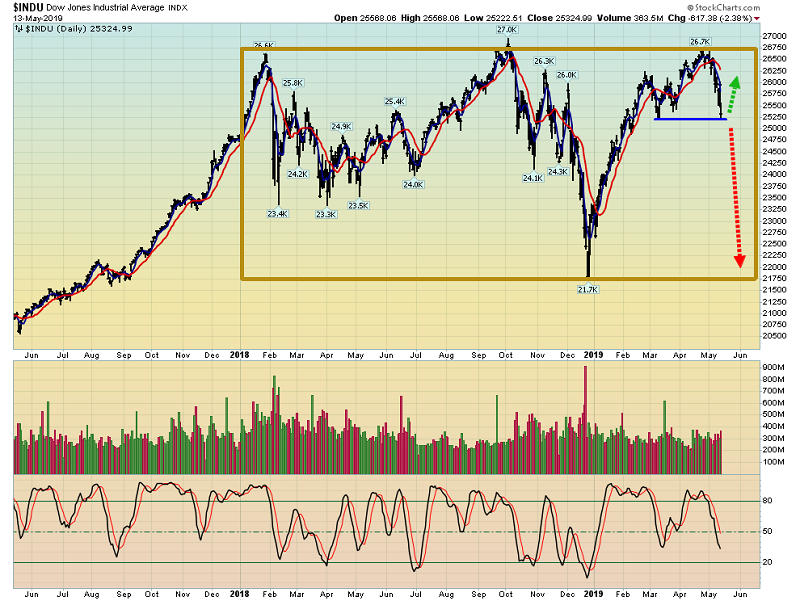 The Dow has gone nowhere since the tariff taxes were launched. I predict it will continue to go nowhere.

Horrifically, at this stage of the business cycle a meltdown is as likely as sideways action. The only people making any money in this stock market are short-term traders and dividend investors. 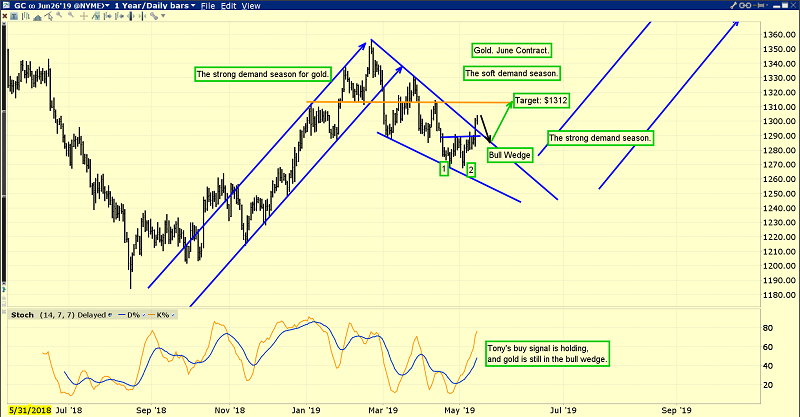 This is the superb chart. The bull wedge breakout is impressive but until the dollar collapses against the yen I would not get overly excited about gold’s immediate prospects for substantially higher prices. 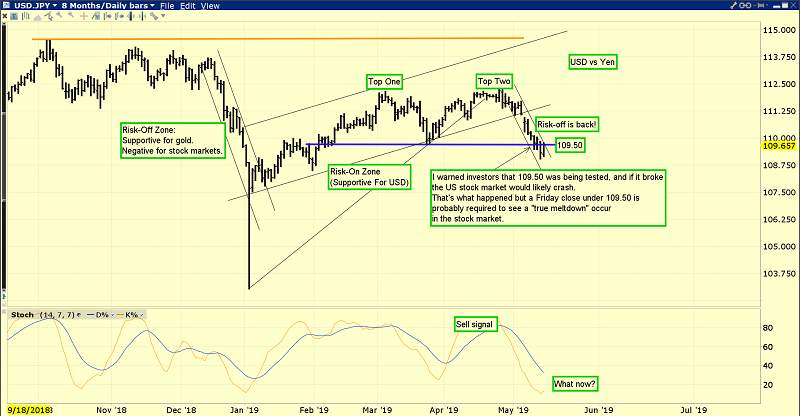 I warned investors about the importance of the 109.50 price zone on this USD vs. Yen chart.

A sustained decline below 109.50 would likely see gold challenge the $1350 area highs and the US stock market could enter an “incineration” phase.

The influence of Chinese citizens on the gold price should not be underestimated. The tariff taxes are creating a wave of nationalism but also concern about the stock market.

When risks rise, bank FOREX traders buy the yen, sell the dollar, and China goes for the gold!

I don’t expect the Chinese government to aggressively sell US T-bonds right now, but more US tariffs are likely and then I expect significant T-bond selling to get underway.

That will create concerning inflation in America as the US government is forced to either print money or raise rates to peddle its debt to cautious domestic buyers. Hedge fund “supremo” Ray Dalio has predicted America’s future is an inflationary depression. Going forwards, all roads lead to gold. 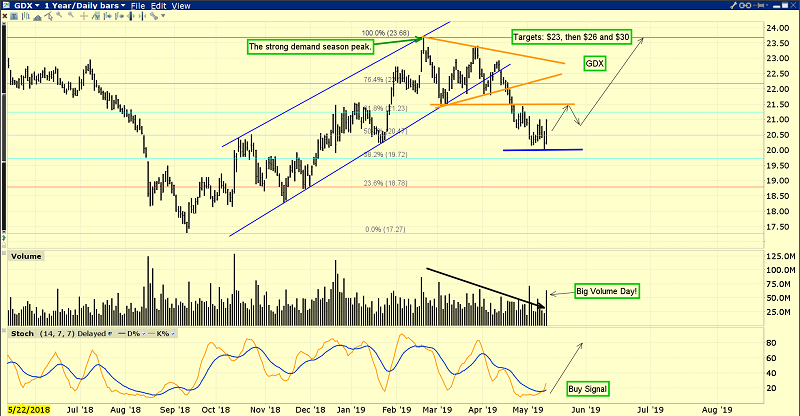 This is the VanEck Vectors Gold Miners ETF (NYSE:GDX) chart. There’s nothing negative about the price action in most gold stocks right now. It’s all positive. Note the burst of volume during yesterday’s spectacular GDX rally….

A rally that occurred while the Dow tumbled 600 points!

In the big picture, it’s quite rare for gold stocks to fall while the stock market falls. It happened in 2008 due to system risk but that’s the exception to the gold stocks versus stock market rule.

Volume has generally softened since the February strong demand season peak after generally rising during the September-February rally. Note my 14,7,7 Stochastics series buy signal that is just occurring now. A Friday close above $23 is my “launchpad” number.

What would be the main feature of an inflationary depression? It would probably be extreme money printing conducted by the US government. GDX has a realistic chance of hitting the $30 area in the second half of this year, and then going even higher in 2020. The good news for gold stock investors is that tariffs are not likely to go away until stock markets incinerate, inflation skyrockets, and the price of gold begins to go parabolic!