In PART I of this report we talked about the Hang Seng and DAX and what is likely to unfold. In today’s report we touch on the U.S. markets. As we’ve suggested in our earlier research this year, U.S. election cycles tend to prompt massive price rotations when the elections are intense. For example, the 2000 election of George W. Bush prompted a very mild price rotation in 1999~2000. This was likely because the transition from Clinton to Bush II was not overly contentious. The 2008 election of Barrack Obama was a moderately contested election cycle and happened at the time of the biggest credit market collapse in modern history – thus, the markets were well on their way lower 12+ months before the election. The 2012 election showed moderate price rotation as it was a highly contested election event in the U.S. The 2015-16 election was highly contested as well and the price rotation was longer and deeper than the 2012 event.0

Now, in 2020, we have one of the biggest, most highly contested U.S. elections in recent history unfolding and we have already begun to see a price range/rotation over the past 12+ months that suggests we could see even bigger price rotation. If we add into this mix the U.S./China trade issues, global market concerns, U.S. political rhetoric and other issues, we have a recipe for A BIG MOVE setting up. 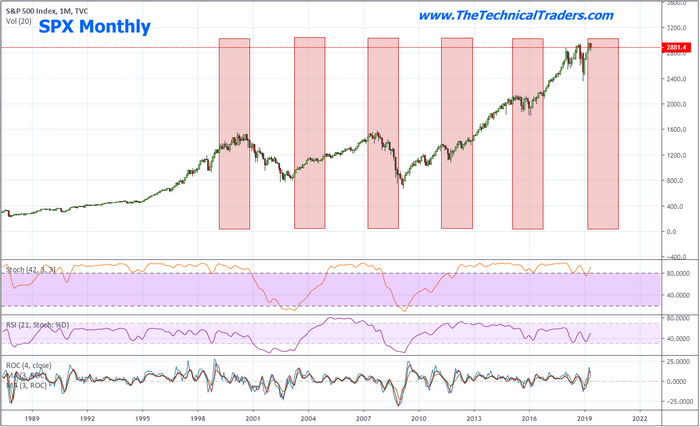 Our analysis still suggests that we are poised for an attempt at new all-time highs before any massive price rotation takes place (near the upper trend line). Yet, we believe the downside price rotation is an eventual component of the next 16+ months of the U.S. election cycle and the price advance that should take place in the near future. In other words, we believe the markets are setting up for a bigger shake-out throughout this election cycle/trade issue event that will prompt lower prices before the end of 2019. We do believe the markets will settle and resume an upward trend bias after this downside price rotation – yet we don’t know exactly when that will happen. 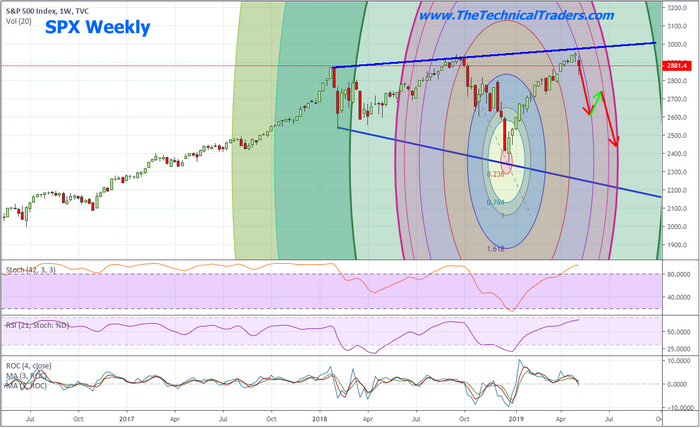 To the best of our ability to predict the future, it appears that the end of 2019 will be filled with large price rotation – likely to the downside as trade issues and election/political issues cause a “shock-wave” in the markets. We believe early 2020 will see a relief rally that may setup a bigger price move throughout the remainder of 2020. Right now, traders need to be prepared for an increase in volatility and price rotation. It is very likely that we will see the VIX above 40 at some point before the end of 2019. This is a time for skilled traders to get in, get profits and get out. Position trading over the next 12+ months will be very difficult.